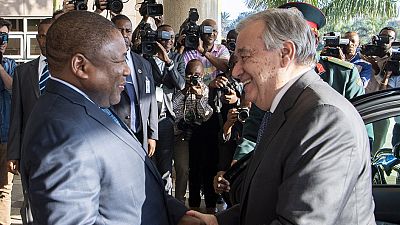 Arriving in Mozambique to express solidarity and see for himself the damage wrought by two back-to-back cyclones earlier this year, UN chief António Guterres on Thursday said “undeniable moral authority” lay with its people, who had borne the brunt of a disaster linked inexorably to climate change, and a warming world.

“For me, visiting Mozambique is a matter of the heart”, he told reporters after meeting President Filipe Nyusi, recalling previous trips as Portugal’s Prime Minister, as High Commissioner for Refugees, and now as Secretary-General, where he “always felt at home” among friends, “I would even say, among brothers.”

It was clear that Cyclones Idai and Kenneth, which affected well over two million Mozambicans when they struck with deadly force last March and April, were natural disasters made worse by chaotic extremes of weather: “Despite that, Mozambique does not really contribute to global warming, but it is at the forefront of the victims of global warming”, said Mr. Guterres, who hours earlier, had received a warm welcome on the tarmac of the capital Maputo’s main airport.

The international community must ‘double its efforts’

Mr. Guterres said the vulnerability of the impoverished southern African State gave its people “the right to demand strong solidarity and strong support from the international community both in response to the dramas created by the storms that plagued the country, and in preparing the country for the reconstruction and preparation for future situations.”

UN agencies which have been leading the relief and recovery effort in support of the Government, consider the nation “an absolute priority”, he added. He praised the very effective organization thus far, and “the extraordinary courage” of the people.

With the initial relief and recovery effort now behind them, he said they were now “launching the reconstruction process with what is now called resilience, that is, the ability of communities to be armed to better withstand these catastrophes in the future.”

The UN would be “with the Mozambican people in all these phases. Naturally, asking the international community to support the people of Mozambique, and support Mozambique [to address the] scale of the problems of both response and reconstruction”, he added.

Less than half of the $3.2 billion requested by the Government at a recent pledging conference in Mozambique had been pledged, and a UN appeal for $280 million in aid was also “far from being fully funded.”

“More aid and more support will be needed from the international community in Mozambique to respond effectively”, said the UN chief. “And not just more support, but the swift implementation of that promised support. That is another crucial issue, regarding the solidarity of the international community. We must not only support, but support on time.”

President Nyusi, in his remarks to reporters alongside the UN chief, thanked Mr. Guterres and the UN, saying, they “were the first person and the first institution to join the Mozambicans”, in the aftermath of the natural disaster.

He highlighted the work of several UN agencies, and added that they “worked to save more lives and mitigate the suffering of Mozambicans.”

The President also attributed some of the help the country has received, directly to the UN and Mr. Guterres, saying they were “a result of the appeals that the Secretary-General did personally, but also as an institution.”

Beira visit on Friday, the eye of the storm

Right upon arrival in Maputo on Thursday for his two-day visit, the UN chief was warmly received with a military parade, traditional dances and the presentation of flowers by a group of children.

He has also participated in a meeting about fighting discrimination against persons with albinism. He heard directly from several experts and children living with albinism regarding the issues they have to deal with.

On Friday morning, the UN Secretary-General will visit Mozambique’s second-largest city, Beira, which was most affected by cyclone Idai. The UN estimates that 90 per cent of all of Beira’s infrastructure has been damaged.

In the large coastal city, Mr. Guterres will meet local authorities, visit one of the affected schools, hold a meeting with people with disabilities, a women’s group and also visit a resettlement camp.

Speaking in Portuguese, the UN chief noted that “Mozambique almost does not contribute to global warming, but it is at the forefront of the victims of this global warming.”

“This gives it the right to demand strong solidarity and strong support from the international community, both in the response to the traumas created by the storms that plagued the country and in preparing for the reconstruction and preparation for future situations”, he added.