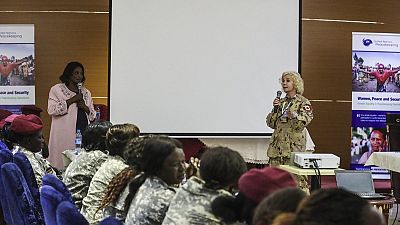 About 100 uniformed women serving in South Sudan’s security sector are working towards combatting gender-based violence as well as securing a leading role in the country’s peace process.

The women representing the national police, prison, wildlife and immigration services as well as the fire brigade and South Sudan People’s Defence Forces, met at two workshops in the capital Juba to discuss how they can be involved in reforming the security sector by including gender issues.

The discussion was driven by UN Resolution 1325, which emphasizes the importance of a gender perspective in the negotiation of peace agreements and their implementation. A topical issue indeed, as the revitalized peace deal signed in September 2018 is yet to be fully implemented.

“I will be using this knowledge [from the workshop] to address my fellow women in uniform and also those who are not to tell them how important we are in that process,” said Captain Najore Paul Josephine from South Sudan’s National Police Service.

“We are equal to the men. Whatever we have, let our voices be heard as women, let’s stand for peace.”

The United Nations Mission in South Sudan, in collaboration with the uniformed forces, organized the workshops on how various peace and security resolutions can be implemented through national action plans.

They also discussed the peacekeeping mission’s role in protecting civilians and building durable peace, as well as its support for the inclusion of 35 per cent female representatives in all aspects of the peace accord implementation.

“We want women to feel a sense of empowerment, because there are provisions for raising their status and for bringing equality. We want to inform them so that they can educate the wider population,” said UNMISS Military Gender and Protection Advisor, Commander Janet MacDougall.

“If you really want long-term peace, we need to engage women. Sometimes they don’t have a voice, but they need to be part of the process,” she said.

Male workshop participants were also keen to boost the status of women, whether they wear uniforms or not.

“We are encouraging women to participate in every field. We need them to realise that women are not weak. They are as strong as men,” said Lieutenant General James Pui Yak, Inspector General of the South Sudan National Police Service. He added that women in the security sector play a crucial role both in combatting gender-based violence and in assisting victims of such aggressions.

“Peace is in our hands. We are the ones to bring it,” she said. “Being in uniform does not mean we are going to fight, it means we are here to protect the public.”

Theresa Siricio Wani, the Chairperson of the Sudan African National Union, called for women to unite and help each other progress in life and society.

“For us to move forward, we have to form women’s solidarity. That way we will climb the ladder easily and incorporate women’s issues. We must do it together and be more effective.”