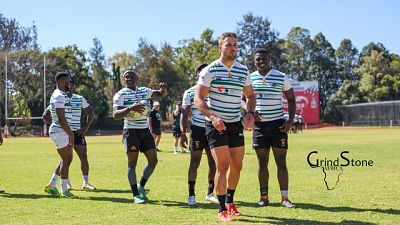 Zimbabwe Sables have announced eight debutants in their squad for the ‘Battle of Zambezi’ against Zambia at the Machinery Exchange Stadium at Harare Sports Club on Saturday – this will be the opening match for both teams in the revived Victoria Cup.

Head coach Brendon Dawson believes the Victoria Cup is a key pillar in Zimbabwe’s bid to qualify and compete in the 2023 Rugby World Cup in France.

“We are looking at our world cup preparations and these are really crucial games for us to get the right standard and the right levels for us to compete,” said Dawson.

Front rowers Henri Boshoff and Tyran Fagan, lock Godwin Mangenje, flanker Blithe ‘Driller’ Mavesere and eight man Godfrey Muzanarwo will be making their debut appearances in the forwards while Martin Mangongo will be maiden appearance for the Sables as a winger.

Henri Boshoff says he is excited to represent Zimbabwe.

“It was interesting, I was really surprised that I got the call up but I was honored at the same time because this weekend I will running out for the first cap and it is a real honor to represent Zimbabwe.

“The Victoria Cup is going to be an immense challenge I feel that we some good sides hat we are facing and we have to really bring our ‘A-game’ is we want to bring this one home. Th guys have received me very well and the team culture is wining one and it will snowball us into making some really good history,” said Boshoff.

The buildup to the 15:30 hrs kick-off will feature the Zimbabwe Lady Sables against Zambia Women’s National team and the school boy battle between rivals St Georges College and Churchill High School.