‘Nothing left to go back for’: UN News hears extraordinary stories of loss, and survival as Mozambique rebuilds from deadly cyclones 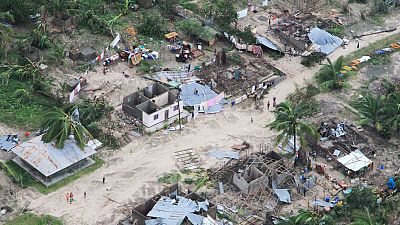 As UN Secretary-General António Guterres arrives in the southern African nation of Mozambique on Thursday for a two-day visit, he will be surveying the damage wrought by the deadly back-to-back cyclones earlier this year. UN News reports from the ground, on some of the extraordinary stories of loss, courage, survival and recovery, that have defined the months since then.

When the winds started blowing across Mozambique on the night of March 14, reaching a maximum speed of 195 kilometers per hour, the tin roof was the first thing to blow away at the home of the Mutizo family.

Inside the tiny coastal house, held together with pieces of plastic, cardboard, and bricks, 62-year Laurinda, her two adult children, Teresa and Ernesto, together with Teresa’s one-year old baby and the two teenagers the family adopted years ago, hugged and huddled together.

Moments later, it was Ernesto’s business shop, where the cyclone destroyed the copy machine and computer he had invested in, with the precious savings he had managed to put away, working as a barber.

The family hoped their remaining source of livelihood, the two little machambas where Laurinda grew rice, would survive, but in the morning, they found out that had been destroyed as well.

As the Mutizos realized their livelihoods had vanished, many other families came to the same conclusion. The deadly cyclones had left behind only debris where there had been businesses. According to UN, Cyclone Idai affected 1.85 million people in the provinces of Inhambane, Manica, Tete, Zambézia and Sofala. In the bustling coastal city of Beira in particular, 90% of all the infrastructure was damaged.

Both cyclones were then followed by weeks of torrential rains. At one point, a UN humanitarian worker described the flooded area as “an inland ocean” that was as big as Luxembourg – about 125km by 25km across.

Mr. Guterres will begin his mission on Thursday by meeting President Filipe Nyusi, and receive updated briefings from UN agencies in the field, before visiting some of the affected areas.

Last month, the country hosted a donors’ conference, hoping to raise $3.2 billion to facilitate the reconstruction of the affected areas. International donors pledged only US$ 1.2 billion.

At the time, the UN Secretary-General stated that “this is the moment to translate into concrete gestures our solidarity with a country affected by one of the worst weather-related catastrophes in African history.” For him, the disaster “also warns us about the urgency of tackling climate change.

”Resilience, and building back

In Mozambique’s second-largest city, Beira, one of the places Mr. Guterres will visit, is the School 25 de Junho. It’s in the neighbourhood where the Mutizos live, although now they sleep in crowded classrooms and eating meals distributed by UN agencies and partners, until they can patch up their damaged home, and move back.

The principal of this school is Frederico Francisco. The school now hosts about 5,000 children, aged five to around 14. Organized in three shifts, starting at 6am, boys and girls dressed in dark and light blue uniforms, fill classrooms which take up to 90 students.

“Before the cyclone, our priority was to build some bathrooms. We only have one toilet for boys and one for girls”, Mr. Francisco said this week. “But now the roofs are our main concern.”

The school has five different pavilions. One was completed last year, built by the community. Windows remain broken and the tin roofs have been blown away, with some pieces that got ripped off, which UN News observed was hanging over the students as they learn maths and sciences under the beating sun.

In the middle of the campus, one pavilion survived intact. It opened in February, one month before the cyclone, and was built by UN-Habitat, the urban development agency, with admirable consideration given to concerns for resilience to extreme climate events.

That’s where Ivanilda Samuel, 10 years old, is studying Portuguese, her favorite subject. She wishes her school had a new roof. But she’s also happy she was back in school after only two weeks. She said she was “very scared” during the cyclone and getting back in class, with all her friends, helped her not think of that night.

As Ivanilda tried to get back to normal life, so have most Mozambicans. The Mutizos are preparing “bolinhos”, a fried butter pastry, which they sell on the street with other candy. Beira was cleaned up, with the help of more than 40 trucks made available by private companies. In the areas most affected by Idai, the distribution of emergency food is coming to an end, after a period of three months and some extensions. The same is happening at the end of July in the districts hit by Kenneth.

The World Food Programme (WFP) emergency coordinator for Idai, Peter Rodrigues, said the agency has reached about 1.6 million people so far. In the second phase of food distribution, which will last until next crop season, around March 2020, WFP will help “around 600,000 to 700,000 more vulnerable people”, at a cost of US$110 million.

Right now, all the temporary housing is being closed down. In Beira, there are around 46,000 people still living in 15 permanent resettlement camps. In the areas that have been badly affected by the second cyclone, there around 1,300 displaced in camps.

‘Nothing left to go back for’

Hortênsia Arnaldo Abreu Júlio, 26, and her three children are one of the families who are not going home. She lived in Mataquari, a neighborhood in Beira, but her house got completely destroyed. “I have nothing left to go back for”, she told us.

When the cyclone hit, she and her kids, ages 5 to 11, moved to her mother’s place. When that house became unsafe, they took refuge in her brother’s car for a couple of days. She then lived in a temporary shelter at a school and was then moved to one in a community center.

She was then given a permanent place to live in the Mandruzi camp, some 40 minutes north of Beira, along with some 375 other families. They live in tents given by the UN Refugee Agency, UNHCR, International Organization for Migration, IOM, and other partners. Many come from villages that flood constantly and were deemed no longer safe to live in.

Hortênsia’s three children have started having classes again at the camp supported by the UN, but she worries it’s not “a permanent school”, where they’ll get a certificate for their studies and progress in classes. She shows us around, and her tent is perfectly organized, with a division in the middle, and clothes perfectly folded and organized in little piles: there are pots and pans by the entrance closer to the fire, which she lights a few times a day to cook the rice and beans she’s given.

Around the tent, she has been able to cultivate about a dozen different varieties of vegetable, in just a few short weeks. There are beans, sweet potatoes, onions, and she has even started harvesting some greens.

Dreaming of a house again

“A piece of land has always been my dream”, she says. She said she “cried a lot” after the cyclone, when her kids had to sleep with dozens of strangers in crowded rooms. “I prayed for a house and a piece of land. A place where I and my sons could be safe.”

At the camp, she started dreaming about a house again. She’s hoping for materials and then she would build it herself. It was also at the camp that she discovered she has the name of a flower, hydrangeas, and marveled at how pretty they are when shown pictures on a smartphone.

“Maybe one day I’ll plant them in front of my house”, she said. “Can you imagine, after all this, having a house and flowers? People wouldn’t believe it.”

Download logo
Macomia district, in Cabo Delgado, Mozambique, has been hard-hit by Cyclone Kenneth, which made landfall on 25 April. OCHA/Saviano Abreu