Mozambique: Resettling and Rebuilding After Cyclones Idai and Kenneth

A season has passed since Category-4 Cyclone Idai devastated and displaced an estimated 1.85 million individuals across Mozambique’s coastal Sofala province and into Central Mozambique. In that time, technical experts of the International Organization for Migration (IOM) have supported the Government’s humanitarian response by providing Shelter, Camp Management, Health, Protection and Water, Sanitation and Hygiene (WASH) services in the districts of Sofala, Manica, Tete and Zambezia.

From the city of Beira, the Government’s Disaster Management Agency (INGC) has received operational support from IOM, notably in Camp Coordination and Camp Management (CCCM) activities, and through the distribution of Non-Food Items (NFIs) and shelter kits to resettled communities, funded by ECHO, USAID, Italy, UKAID, CERF, Japan, Ireland and Switzerland.

On 27 June 2019, the CCCM and Shelter clusters, for which IOM serves as lead and co-lead with the IFRC respectively, visited a new temporary site in Ndeja, to support the distribution of 71 shelter kits containing blankets, plastic sheets, tarps and toolkits for newly relocated families to construct a basic make-shift shelter.

Christina Armando, a newly resettled resident of Ndeja, was among the affected population who received a shelter kit. “We lost everything: the house, food stocks, animals, clothing and all of our belongings. I came alone to Ndeja from Muda once the government allocated us with new land,” she said, standing beside the plot of land she spent the morning clearing in anticipation of the arrival of the shelter kits.

Originally from Tete, Christina was living in Muda when cyclone Idai swept in, destroying her family’s home. Christina’s two children and husband remain in Muda, and she hopes to have them join her in Ndeja soon. “I feel better now knowing we will have a roof over our heads to protect us at night,” she explained. “We are able to forget what happened and instead look forward.”

“We came here yesterday from Castanheira, not far from Muda,” he explained, motioning to the South. “Before we came to Ndeja, we were sleeping beside the water, as the roof that remained from what used to be our house was slanted and provided little shelter. We thought we could stay there to rebuild and replant our crops, but the land in Castanheira was too low and the water refused to drain after the cyclone. We realized it would not be possible to stay.”

Content with his recently allocated land and eager to set up his shelter using his kit, João said, “We are optimistic for a new start and being able to build a new shelter for ourselves so that we can then focus on replanting crops. The land here is higher and dryer than in Muda, better for maize cultivation.”

As of 11 June, the families of João and Christina are just two of over 983 households that have been relocated across four resettlement sites by the government, with technical support from IOM.

IOM has continued to provide support to humanitarian partners by identifying and assessing the needs of individuals and households using the Displacement Tracking Matrix (DTM), in addition to coordinating and supporting relevant Health and Protection activities.

As of June 2019, over 51,317 individuals (11,711 households) have been tracked using DTM across 50 sites, disseminating information with 990 recipients from over 177 organizations to improve coordination and response.

According to IOM’s Beira-based DTM officer Chris Zapp, “DTM allows us to have a daily monitoring tool on individuals and households so that partners can use this information for distributions and other service provision activities that rely on household numbers. It also allows us to have multi-sectorial site assessments, which offers an in-depth look at the needs and vulnerabilities of each, built with clusters and other partners on WASH, Food Security, Shelter, Protection and Community Engagement.”

Additionally, IOM is supporting improvements to health and protections services.

“We are assisting the government with social protection; we have about 40 activists on the ground across the affected districts to identify vulnerable protection cases and refer these cases accordingly to available services and the referral mechanism already in place, conduct awareness raising sessions, workshops and trainings,” said Beira Protection Coordinator Neischa Macaringue. “As of July, we have six trainings occurring on various issues, including trafficking in persons, camp management, child protection and gender-based violence, in addition to supporting the presence of women and girl friendly spaces and the protection tents.”

IOM will continue to co-ordinate response activities, identify and support other relevant partnerships for the implementations of these projects with the aim of ensuring stable, voluntary and dignified resettlements and returns for persons displaced by Cyclone Idai to their places of origin. 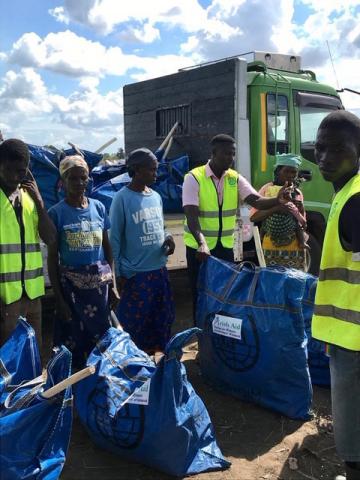