In poor countries like Burundi, seasonal rains often lead to displacement—due to floods and landslides that impact subsistence farmers and small-scale traders, many of whom are vulnerable are vulnerable to losing farmland and their livelihoods in a matter of minutes. When such misfortune is accompanied by an epidemic, outbreak of disease or some other public health emergency, contagion can spread quickly once those displaced are on the move.

In fact, in Burundi IOM’s Displacement Tracking Matrix estimates that natural disasters account for nearly 77 percent of all displacement cases. A landlocked country located between the Democratic Republic of Congo (DRC), Rwanda and the United Republic of Tanzania, Burundi’s porous borders require additional infrastructure and equipment, including those meant for border health surveillance.

The declaration of an Ebola Virus Disease (EVD) outbreak in the neighboring Democratic Republic of the Congo—coupled with the risk of cross-border disease transmission—presents the potential here for a “perfect storm” of misery: a full-fledged epidemic in the region entering a vacuum of effective health surveillance and screening at Burundi’s points of entry. Nine of Burundi’s 18 provinces border neighboring countries.

At the same time, an upsurge of Burundian refugees returning from Tanzania has also meant stretching public resources ever further to accommodate a growing population. By June, for example Burundi had received over 71,000 Burundian returnees, more than half (45,000) coming just in 2018.

To mitigate these challenges, this month the International Organization for Migration (IOM) and the Government of Japan have launched a one-year integrated project. Its title is long, but it covers the essentials: “Enhancing Integrated Capacity and Assistance to Crisis Affected Populations on Disease Outbreaks, Natural Disasters and Returns in Burundi.”

Its intent is basic: to bolster national and local efforts to respond to potential disease outbreaks and natural disasters by strengthening border management and successfully reintegrating displaced populations.

Japan’s donation of US$1 million towards the project is meant to enhance capacity of national authorities and local communities which will help both prevent and respond quickly to potential disease outbreaks at borders. The funding will help provide emergency shelter repair kits, rental assistance, and water, sanitation and hygiene (WASH) support to the displaced as well as host communities. These initiatives will be complemented with protection and community stabilization activities to enhance social cohesion and to reduce cases of conflict over resources.

The project’s launch, held at the Gatumba border with the Democratic Republic of Congo, was attended by the Ambassador of Japan to Burundi, His Excellency Takayuki Miyashita, Permanent Secretary of the Ministry of Foreign Affairs, Isidore Ntirampeba, Governor of Bujumbura Rural province, Nadine Gacuti, UN Resident Coordinator in Burundi, Dr. Garry Conille, Chief of Mission of IOM Burundi, AJ Morgen, local authorities, governors and representatives of implementing partners, Terra Renaissance and the Burundi Red Cross.

Isidore Ntirampeba, Permanent Secretary of the Ministry of Foreign Affairs, said “The Burundi Government, through the National Platform, has the institutional, organizational and technical capacity in the field of risk prevention and disaster management of all kinds. Nevertheless, these capacities need to be supported in their efforts to find the path of sustainable development, while improving skills to proactively manage risk and build resilience for future crises.

This project, he continued, “will enable the government to fight effectively against epidemics, including the Ebola epidemic which has struck the DRC, as well as cholera. The project will also help people who are victims of natural disasters. This is a support to the National Platform.”

In his address, His Excellency Ambassador Takayuki Miyashita, stressed “The Government of Japan focuses on development cooperation to protect and empower individuals, especially those liable to be vulnerable, to realize human security. This project is the first project for which a Japanese NGO is collaborating with IOM in Burundi. We thank IOM Burundi and its partners for carrying out this important project.”

Download logo
His Excellency Ambassador Miyashita of Japan presents donated health equipment to the Permanent Secretary of the Ministry of Foreign Affairs, Isidore Ntirampeba, during the launch ceremony in Gatumba, Burundi 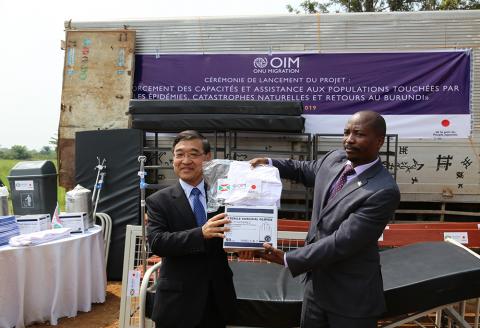