60 young debaters from the Middle East, North Africa, Europe and the Balkans met in Malta to debate a sustainable 2030 future

“It is our duty to build the next generation of Euro-Mediterranean dialogue leaders to transform debate into action for a sustainable future. This was stated by the Minister for Foreign Affairs and Trade Promotion Carmelo Abela in his address at the 1st Euro-Med Debate and Policy Forum. Held in Malta for the first time, this Forum brought together around 60 young debaters aged between 18-to 35 from 20 different countries from the Middle East, North Africa, Europe and the Balkans. These youth met for a unique programme offering an intercultural debate competition addressing quality education, gender equality, climate action, peace, justice and strong institutions. 3 of the participants were Maltese whilst 1 one of the 10 judges was also Maltese.

During his attendance, the Minister for Foreign Affairs presented awards to the winners of this debate competition for best female debater, best male debater and the winning team. He encouraged young people to encompass the boldness, the determination and the foresight to fulfil the vision of the 2030 Agenda. “As the driving force in modern-day technology, you as young people, can most able promote renewable energy sources, climate change education and awareness and the protection of the environment while calling for just and inclusive societies”, said Abela.

Following the completion of this debate and policy forum, the Minister said that now policy makers need to guarantee that the numerous debates and arguments generated on various policies are duly analysed and the most insightful ideas need to be acted upon. He remarked that this approach fits with the UN Youth Strategy 2030 and the EU Youth Strategy 2027 to ensure that youths are at the forefront of our common agenda. Minister Carmelo Abela added that the Ministry for Foreign Affairs and Trade Promotion together with other entities in Malta stand ready to support the Anna Lindh Foundation in the development of a Young Mediterranean Voices Leadership Academy.

The overall objective of the Young Mediterranean voices programme is to empower young people to enhance a culture of dialogue to contribute to public policy. The aim is to hold intercultural debate and creative thinking on how to transform youth voices to youth agency and leadership for the 2030 Agenda for Sustainable Development.

Organised by Aġenzija Żgħażagħ, Anna Lindh Foundation, British Council, Parliamentary Secretariat for Youth Sport and Voluntary Organisations and co-funded by the European Commission, it provided an open space for youth from across the Mediterranean and an empowerment for a to lead positive change with their innovative ideas and solutions.

Download logo
60 young debaters from the Middle East, North Africa, Europe and the Balkans met in Malta to debate a sustainable 2030 future (1) 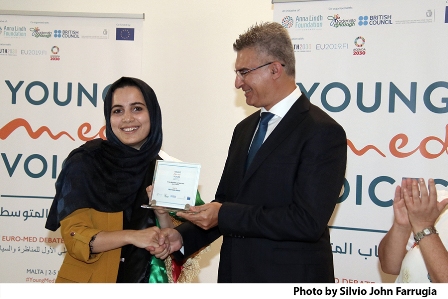