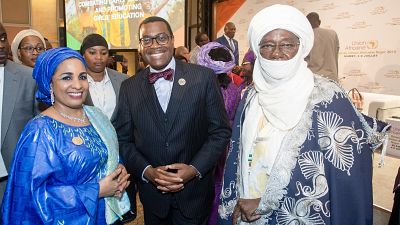 The president of the African Development Bank (https://www.AfDB.org), Akinwumi Adesina joined continental leaders in Niger for an African Union summit which saw the official launch of the African Continental Free Trade Area agreement – the world’s largest free trade area since the formation of the World Trade Organization.

The agreement, ratified in April, will cover a market of 1.2 billion people and an estimated gross domestic product (GDP) of $2.5 trillion, across all 55 member States of the African Union.

The Bank has been central in shaping the AfCFTA agreement, setting its strategy and format and approving a $4.8 million grant to the AU for the establishing of the Secretariat and to accelerate its roll out. Nigeria made history at the summit by becoming the 54th African country to sign up.

Commending all the parties involved for bringing this historic agreement to fruition, President of Niger, Mahamadou Issoufou said: “The time has come to translate words into actions. The continent has waited for far too long, and we are glad this historic moment for the people of Africa is being witnessed in Niger.”

His comments were echoed by AU President, Abdel Fattah al-Sissi and AU Chairperson, Moussa Faki Mahamat who both stressed the need to celebrate the strides the continent has made.

“An old dream has come true. The founding fathers must be proud,” said Faki.

Child marriage a scourge, women’s inclusion must be prioritized – Adesina

Whilst in Niamey, Adesina also participated in a high-level panel on combatting child marriage, organized on the sidelines of the summit by the First Ladies of West African Economic Community states and Niger’s first lady Dr. Lala Malika Mahamadou Issoufou.

The panel, themed: Combatting child marriage and promoting girls’ education and retention in schools, heard testimonies from young girls as well as from Niger’s traditional chiefs, who committed to support the recommendations of the meeting.

“It is totally unacceptable that in Africa some people would block the future of girls. Fundamentally, we have to protect girls, help them achieve and perform.” Adesina said.

Highlighting the need to urgently address “this plague which jeopardizes the future of girls in Africa,” Adesina urged participants to prioritise the inclusion of women. “Women are the backbone of the African economy and of the African communities,” Adesina stated.

“Keeping girls in school is one of the best ways to end child marriage. Like men, an educated girl will contribute to her community’s transformation,” the President said.

Rounding off the conversation Niger’s First Lady described the issue as a “critical priority.”

“It is not just a West Africa issue, but an issue for the entire region. So all of us must come together – public, non-governmental institutions, religions leaders, communities, families, and schools – for a sustained multi-stakeholder approach to combat early marriage and promote girls’ education,” Malika Mahamadou Issoufou concluded.