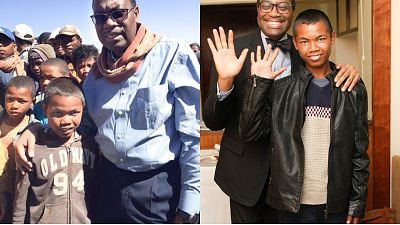 Three years ago, Anthony, then 11, showed signs of stunted growth as observed by African Development Bank (www.AfDB.org) President Akinwumi Adesina during a visit to Madagascar’s Bas Mangoky region. To the Bank chief, the boy looked no more than 5 years of age.

“I was transfixed by one of the children attracted by my helicopter landing. He was so small that I was convinced he could be no more than 5 years old,” recalls President Adesina.

“I asked him his name and he told me it was Anthony. But his voice was not that of a 5-year-old child. I was shocked to discover that he was 11. He was suffering from severe malnutrition.”

This was on 2 August 2016 and the story could have ended there. President Adesina could have continued his tour of the region, where rice production had tripled, from two to six tonnes per hectare, thanks to the decisive intervention of the African Development Fund (ADF), the concessional window of the African Development Bank. He could have continued his rounds, proud of the Fund’s intervention, which had enabled the region to record a 141% increase in its agricultural income.

This, however, would have gone against his convictions and his personal efforts to help curb malnutrition. “Anthony said his dream was to become a doctor,” he recalls, visibly moved when he reunited with Anthony this week on the sidelines of the ADF-15 replenishment meeting in Antananarivo. The President of the African Development Bank thus decided, in agreement with his wife, to adopt Anthony and provide him with the means to live a dignified life, alongside his family, in his home environment.

And even then, Anthony’s incredible story did not end there. “I saw him again, the day before yesterday. Our son, Anthony, is growing normally. He is fine and well-fed,” Adesina says. “He is doing well in school and is one of the best in his class. I really hope that one day he will achieve his dream of becoming a doctor.” Barely half the height of his adoptive father in 2016, Anthony now seems well on track to overtake him.

Senior representatives of ADF donors are currently meeting in Madagascar to discuss the 15th Replenishment of the Fund. ADF has invested some $48 billion in low-income African countries.

For President Adesina, Anthony’s story is one of hope. Just like this young Malagasy boy, the continent can overcome its weaknesses. “Fragility is not inevitable. It can be overcome,” Adesina said in his opening speech at the second consultative meeting of the replenishment of the Fund.

“The African Development Fund can continue to create hope among the least developed populations, offer opportunities to those who have nothing, and restore pride and determination,” he said, calling on donor countries to maintain their strong commitment to the continent.

“Côte d’Ivoire’s GDP plummeted following the political, economic and social turbulence it suffered a few years back. Thanks to the timely and decisive action of the African Development Fund, this country now has one of the most impressive growth rates in Africa, even the world.”

Just like Anthony, who is now racing ahead of the other pupils in his class.

Click on the following link to view pictures: https://flic.kr/s/aHsmEKixpj