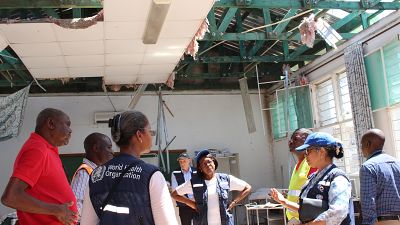 More than 50 health facilities across Sofala Province, Mozambique, suffered serious damage from Cyclone Idai. WHO is working closely with the Ministry of Health and partners to assess and support the return of essential health services, using its Health Resources Availability Mapping System (known as HeRAMS).

“The roof had blown off most of the buildings and the water was more than one metre high. We had to move the patients out and put their beds up on top of the benches in the waiting area.

Two deliveries were performed on the day after the cyclone, one in the waiting area on the beds placed on top of the seats and another one inside a boat in the courtyard at the entrance to the maternity hospital, since every hospital area was full of water.”

A doctor from Buzi District Hospital tells Dr Raquel Mahoque Maguele, WHO Health Operations team lead, about the night Cyclone Idai hit the rural town. She has arrived in Buzi with a team from WHO to assess the damage caused to the hospital and support the Ministry of Health to restore essential services as soon as possible.

Before the cyclone, the hospital saw 250-300 patients per day. It had 89 beds and provided a full range of services including maternity, disease care, trauma care, emergency and surgery.

The day after the cyclone hit, the staff took the medicines that were not destroyed in a car to higher ground outside town so they could continue to distribute essential medicines to people in need. The emergency room continued to function through the difficult conditions of the first days after the cyclone.

“WHO is working closely with the Ministry of Health to bring back health services to the communities affected by the cyclone,” said Dr Mahoque Maguele.

“As with so many of the health facilities in Sofala Province, Buzi hospital suffered extensive damage and will take time and a lot of resources to restore.”

For several weeks following the cyclone, the only access to Buzi was by helicopter or a two-hour boat trip along the Buzi River to Beira city on the coast. Now that the road is open, the WHO assessment team has come to inspect the damage and provide guidance to the local health authorities on how to restore health services to the people of Buzi. This includes assessing whether medicines exposed to water are still viable, surveillance for disease early warning and determining what kind of short-term repairs could enable health services to recommence as soon as possible.

The head of the health district in Buzi told Dr Mahoque Maguele: “We are grateful that WHO is here. Of all sectors, health needs the most support now.”

In the weeks following the cyclone, health services in Buzi were provided by Emergency Medical Team Samaritan’s Purse, which set up a type 2 field hospital just next to the damaged hospital, and patients with diarrhoea were sent to the MSF-managed cholera treatment centre also in the hospital grounds. These stop-gap services were phased out at the end of April. WHO is working with the Ministry of Health to provide continuity of health services for the people of Buzi and other affected communities.

Buzi District Hospital is one of more than 50 health facilities damaged by the cyclone and flooding in Mozambique. WHO supported the health authorities to assess the structural damage to these health facilities and find out what services they can provide since the cyclone.

After natural disasters and in conflict zones, WHO uses its Health Resources Availability Mapping System (known as HeRAMS) to gather information on the state of infrastructure and health services.

“Here in Mozambique, we have been working with partners, including International Federation of the Red Cross (IFRC), Save the Children, Team Rubicon and FHI 360, to collect information about the damaged health facilities,” said Naomi Morris, information management officer with WHO’s response team in Beira. “Initially, information about the damage was gathered from aerial assessments in flooded areas. Now we are able to update the online system with more details, such as whether the facility has surgical capacity and if staff are available. We are sharing this information with colleagues from the Ministry of Health who want to work with us to develop this system further.”

The information in HeRAMS is being used to support decision making and coordination of health partners in emergencies. It helped estimate costs of restoring services and to inform the post-disaster needs assessment (PDNA) supported by WHO.

Jerome Souquet, logistician deployed to the WHO response team, said “We have been supporting minor emergency repairs that can be done quickly to allow some facilities to provide urgent services, then we will focus on more longer-term support, including recommending improvements to make health facilities more cyclone-resistant.”