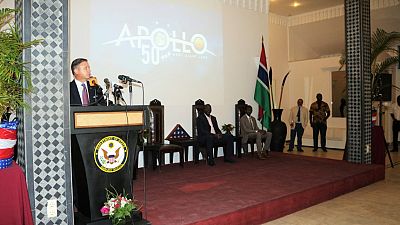 The U.S. Embassy hosted the annual Independence Day Official reception on Tuesday, July 2.  It was the largest ever July 4th reception in Banjul with well over 150 government representatives, members of civil society and press, and even popular Gambian recording artists in attendance.  The theme of the evening was the 50th Anniversary of the Apollo 11 moon landing.

Ambassador Carl Paschall used the theme to discuss the importance of STEM education, saying that technological advancement “will not be possible if we do not invest in our youth and prepare them for an ever-changing world.  Supporting improvements in education is one of our primary goals in The Gambia, and we are proud to partner with the Government of The Gambia as it works to revolutionize  STEM education.  The Minister of Justice and Attorney General, delivered remarks on behalf of the government saying, “The relationship between the United States of America and Republic of The Gambia is based on our shared values of Democracy and Human Rights.”  Special guests, the Ministers of Higher and Basic Education addressed the crowd detailing how they are partnering with the U.S. to improve STEM education in The Gambia.

Distributed by APO Group on behalf of U.S. Embassy in The Gambia.
Media files