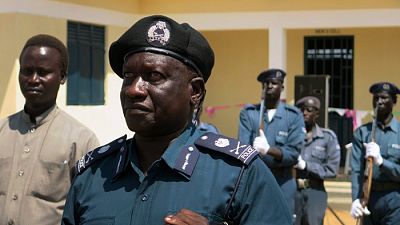 That’s the bright future hoped for in War-awar in Aweil East, following the delivery of a UN-funded police station to the officers in the area. The structure, and its personnel, will keep both law-abiding citizens and hardened criminals safe.

“Now we are very happy because they brought a safe place for those being detained, in closed and clean cells,” said a beaming Mrs. Rosa Nyanut Agany, a jubilant citizen of War-awar.

“If your child is detained because of committing a crime or making a mistake, he or she will remain safe, and as a mother you will stay calm at home,” she added.

The local community has been crying out for the rule of law expected to be delivered by means of proper facilities for its police officers. Using 49,000 dollars, provided by the United Nations Mission in South Sudan, the Action for Children Foundation has constructed the new police station. It is an example of the dozens of Quick Impact Projects being financed by the peacekeeping mission across the country.

On his part, Ataklti Hailu, head of the UN field office in Aweil, urged the government and community to maintain the facilities in good shape.

“I call upon all partners to come together to further improve the condition of this compound. Police and suspects can plant flowers here,” Mr. Hailu suggested, adding that the peacekeeping mission will continue to support the people of South Sudan.

To make War-awar a better place to live, Police Commissioner John Bak Alfonse also urged military police units to put an immediate end to the arbitrary arrests that have been known to be rife in the area.

“Arrests are the sole responsibility and mandate of the police,” Mr. Alfonse pointed out to those in attendance, while thanking the United Nations Mission in South Sudan for providing the new structure.