Coronavirus – South Africa: Electoral Commission of South Africa (IEC) must move with speed to confirm addresses on the voters roll

Presidential Election in the Islamic Republic of Mauritania

Japan is committed to further strengthening friendly and cooperative relations with Mauritania on the basis of good relationship of trust established through bilateral cooperation in areas such as fishery and health.

The Government of Japan also recognizes that Mauritania plays an extremely important role to ensure the stability in the Sahel region and hopes that the incoming President will exercise leadership in the economic and social development of the country as well as in the fight against terrorism so that the peace and prosperity in the region will be enhanced.

Distributed by APO Group on behalf of Ministry of Foreign Affairs of Japan. 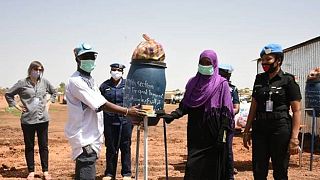