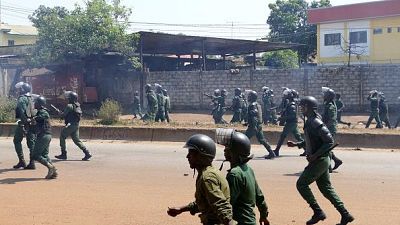 Guinea’s president should not put into effect a new law that gives gendarmes too much discretion to use firearms and could shield them from prosecution for unlawful killings, Human Rights Watch and Amnesty International said today. Guinea’s security forces have a record of using excessive force in responding to often violent street protests.

Guinea’s National Assembly passed a law proposed by the government on the use of arms by the gendarmerie on June 25, 2019. The law sets out several justifications for the use of force – including to defend positions gendarmes occupy – without making clear that firearms can only be used when there is a threat of death or serious injury. The law’s explanatory note also notes the need to protect gendarmes who resort to force from vengeful prosecutions, raising concern that it will be used to prevent judicial oversight of law enforcement.

“With political tension rising ahead of the 2020 presidential elections, the last thing Guinea needs is a vague law that appears to give gendarmes too much discretion to resort to lethal force,” said Corinne Dufka, West Africa director at Human Rights Watch. “President Alpha Condé should call on the National Assembly to revise it to comply with Guinea’s obligations under international and African human rights law.

Guinea has experienced violent street protests and frequent clashes between demonstrators and the security forces in recent years. More demonstrations are likely this year if, as many Guinean groups predict, President Condé seeks to amend the constitution to run for a third term.

Aladji Cellou Camara, the military’s director of communications, told Human Rights Watch that the new law is necessary to provide more guidance on when gendarmes can use force, particularly in view of the increased threat that Guinea faces from terrorism. The law’s explanatory note references terrorism but also notes that the security forces are responding to periods, “marked by intense and repeated interventions that are without precedent,” in an apparent reference to street protests.

Camara said that the law is not intended to replace Guinea’s 2015 law on the maintenance of public order, which provides guidance on the use of force by the security forces when responding to demonstrations. But while both the draft law and 2015 law require that force be exercised only when necessary and proportionate, they do not explicitly limit the use of firearms to imminent threats of death or serious injury. This raises concerns that other objectives, such as breaking up unauthorized protest, could justify the use of lethal force.

International human rights standards state that firearms should never be used simply to disperse an assembly. If the use of force to disperse violent protests is unavoidable, for example to protect law enforcement, participants, or bystanders against violence, the security forces must use only the minimum level of force necessary to contain the situation. They should rely on the proportionate use of less-lethal weapons, such as batons and other types of crowd-control equipment. Intentional lethal use of firearms may only be made when strictly unavoidable in order to protect life.

Camara said that, regardless of the legal framework, police and gendarmes are never armed when policing street protests. “If I saw a gendarme with a firearm, I would intervene immediately,” General Ibrahima Baldé, the head of the gendarmerie, told Human Rights Watch in April 2018.

Guinea, however, has a long history of excessive use of firearms by security forces during confrontations with demonstrators. Scores of demonstrators, as well as several members of the security forces, have been killed, most by firearms, in the last decade. Dozens of demonstrators and 2 law enforcement officers were killed in 2012-2013 in advance of parliamentary elections. At least 12 people were killed, including 6 by firearms, and scores injured prior to and following presidential elections in 2015. At least 21 people died during the 2018 demonstrations, with at least 12 alleged fatal shootings by the security forces and a police officer and gendarme killed by demonstrators.

Furthermore, if Guinea does experience a new round of violent demonstrations in the coming months, the government may characterize them as a threat to public security that requires a forceful law enforcement response. Guinean security officials frequently told Human Rights Watch and Amnesty International that 2018’s demonstrations were not street protests but “urban violence.” In November 2018, following a spate of violent public protests, the Guinean government deployed army units to key trouble spots in Conakry.

The law’s explanatory note states that it is needed “to protect [gendarmes] where there are criminal proceedings against them” that are an effort to “take revenge” against the public authorities. But this statement ignores the fact that Guinea has rarely prosecuted members of the security forces for the excessive use of force.

Human Rights Watch and Amnesty International have documented dozens of alleged fatal shootings by the security forces since 2010. But the conviction on February of a police captain for the 2016 killing of a demonstrator was the first time a member of the security forces was brought to justice for shooting a protester dead since 2010.

To reflect established human rights principles, such as the Guidelines for the Policing of Assemblies by Law Enforcement Officials in Africa and the UN Basic Principles on the Use of Force and Firearms by Law Enforcement Officials, laws should state clearly that security forces should only use firearms when there is an imminent risk of death or serious injury to a person, or to prevent the commission of a serious crime involving a grave threat to life, and only when less extreme measures are insufficient to achieve these objectives. Laws should also contain clear reporting and accountability requirements to ensure that any instance of excessive use of force, and that the officer suspected of using it, is brought to justice in a fair trial.

Human Rights Watch and Amnesty International have repeatedly called for the creation of adequate oversight mechanisms, such as a special task force of judges, to more effectively investigate the conduct of the security forces during protests.

“As we approach 2020 presidential elections, now isn’t the time for weakening the regulation of the security forces,” said Francois Patuel, Amnesty International West Africa researcher. “The Guinean government should instead strengthen its ability to effectively investigate and prosecute alleged security force misconduct.”

Download logo
Gendarmes respond to an opposition demonstration in Conakry, Guinea, on November 15, 2018