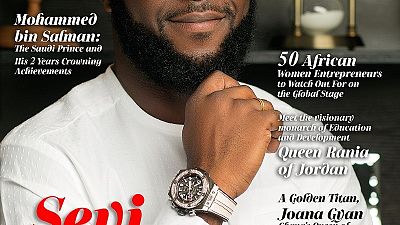 The image many have of a meeting of leaders of business and government is of a room filled with people aged 50-70, even 80 years old, discussing the narratives that will shape the world. But the decisions from such meeting will not impact their generation, they will impact young people.

Over 50% of the world’s population is under the age of 27. So if someone is going to decide to shape the future, the youth, have to be part of that dialogue; a bigger part of this narrative of co-creating the future.

Professor Klaus Schwab, Founder and Executive Chairman of the World Economic Forum, realized this early on and founded the Global Shapers Community to empower young people to play an active role in shaping local, regional and global agendas.

With the largest youth population in history, there is an unprecedented opportunity for young people to take an active role in shaping the future. This generation has inherited enormous global challenges but has the ability to confront the status quo and offer youth-led solutions for change. They are today’s leaders.

The theme of the July / August issue of the Pan-African Entrepreneurial and Luxury magazine, PLEASURES MAGAZINE is “Creating a Shared Future in a Fractured World”, a special edition to celebrate young achievers who are changing our world in no small ways, these two keeps moving the needle especially in the area of entrepreneurship. They are taking more risks than ever before and building phenomenal businesses and taking decisions that are tackling problems and creating lots of jobs in the process. They are real change agents.

Seyi Tinubu, CEO of advertising giant, Loatsad Promomedia and Noella Tinubu Foundation, a non-profit organization in the interview with Pleasures magazine, highlighted his entrepreneurial journey and the impact of his Noella Tinubu Foundation, an initiative to empower and encourage youths to become change-makers in society by helping them to identify their passion and use that passion to create solutions that empower Nigerian communities and drive greater economic growth.

On the making of Seyi Tinubu

One of the refreshing aspects of the founder of Noella Tinubu Foundation, Seyi Tinubu’s interview with Pleasures Magazine is that he comes across as someone who doesn’t believe in mincing words. Be it the conviction with which he talks about his enterprise and what it has achieved so far, or his refusal to accept the status quo just because of a that’s-the-way-it-has-always-been-done sort of mentality, this Nigerian entrepreneur and the son of one of the leading Nigerian politicians, Asiwaju Bola Ahmed Tinubu seems to be charged up with a vision of a better future for the world at large.

The Noella Tinubu Foundation, founded by Seyi and his wife Layal started out, as a result of the yearnings of people who always ask the couple for support and help in one area or another. So they both thought it would be best to set up a foundation where they can use a platform to empower people, both entrepreneurs and their startup businesses as well as other areas requiring support to keep their initiatives running. It has since grown into becoming “a global millennial startup movement for social good,” with Seyi and his team essentially developing entrepreneurial pipelines across Africa that transform business minds into change agents for sustainable impact.

“I love innovations and I see the future being tech driven. With that said, the Noella Tinubu Foundation is not limited to creating programs for tech entrepreneurs.” Seyi said in the interview.

With this being the case, PLEASURES MAGAZINE beamed the impact of the foundation and in his response to the question, Seyi said: “We’ve come up with initiatives such as scholarships to deserving students, empowering kids and youths with educational materials, training and skills empowerment, and other outreach programs to orphans, widows and children.”

“The Noella Tinubu Foundation has grown to a full-blown movement which is leading an entire generation to change the world,” he declares. “By 2050, the population in Africa is set to double to two billion with nearly half of that being under 25 years old. I believe that a rise in the younger population alongside entrepreneurship is significant to stir up a job creation wave. Reason why the NoellaTinubu Foundation was set up as a platform to empower and encourage youths to become change makers in society by helping them identify their passion to create solutions that empower Nigerian communities and drive greater economic growth. We give help to various individuals, bodies, groups, etc as a way to increase not just their livelihood, career, business, interests, etc.

We run workshops, training, invest, scale; all for the purpose of changing the trajectory of students on college campuses across Africa. Our aim is to provide a risk-free opportunity, and then back it up with the support required to have change.

We are distinguished in that we are a pipeline creator, the most fundamental piece of the startup funnel. We turn ordinary students into impact entrepreneurs, because we start with people, not ideas.”

As Seyi rightly notes, the NTF has transformed from what it was in its initial days- but it’s a change that has been for the better. “The objective of our foundation is to shortcut the entrepreneurial journey for young people, and get them to realize that you can build a billion-dollar business by creatively thinking about some of our world’s toughest challenges.”

According to him, “We pick an exciting area of impact that can be addressed and then we write a detailed opportunity map, outlining where billion dollar companies could be generated. By focusing our entire network on one topic, it changes the paradigm of a generation, and exposes market inefficiencies in the current development space, which can be solved through business approaches. This year’s challenge is on rethinking how to harness the power of energy to transform 10 million lives. We used to focus on the bottom of the pyramid, but I have shifted our focus on empowering more people to reach the middle class. Tackling poverty is not enough; we must move the lower third into economic independence.”

Another sector Seyi is making marks is the advertising sector. Although he is trained as a lawyer, his entry into the lucrative advertising industry has rewritten how the industry is run in Nigeria. His company Loatsad Promomedia is the rave of the industry now. With Seyi at the helm, Loatsad Promomedia has provided services for various clients in Telecommunications, Energy, Banking, Food and Beverages, Pharmaceuticals, Media, Real Estate, Education and Government, including Lagos State Advertising Agency (LASAA).

In 2017, his innovative imputes into the industry earned him a prestigious Young Entrepreneur of The Year Award. In recognising and rewarding excellence in Nigeria’s Entrepreneurs, Advertising and Marketing Communications sectors.

Mr Seyi's giant strides are even more appreciated by many, in his effort to live off the illustrious name of his father. He remains one of the most inventive and energetic minds in Nigerian technology today.

This issue also includes a look at the numerous positive initiatives of Queen Rania Foundation for Education and Development, founded by Queen Rania Al Abdulahi of Jordan. And on the two years crowning achievements of Mohammed bin Salman, crown prince of Saudi Arabia.

Plus, a special profiling of 50 African Women Entrepreneurs to watch out for on the global stage.

And as usual, the magazine is incomplete without your usual light stories and other human interest narratives such as the heart touching grass to grace story of Joana Gyan, Ghana’s queen of Gold export. Read the interesting tourist sites in Africa, these and many more reports combine in making the magazine a collector’s item and reading pleasure for all and sundry.

Distributed by APO Group on behalf of Pleasures Magazine.