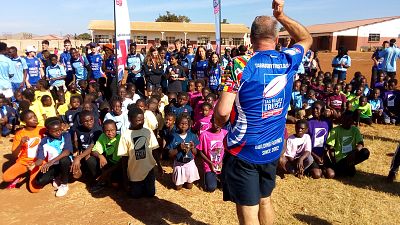 The annual Inter-Provincial School games which are held in different Provincial Headquarters of Zambia each year took place in Chipata District, the headquarters of Eastern Province near the Malawi borderline.

The U19 Tournament which attracted 2 girl's Teams from Eastern and Lusaka also had 3 boy's teams from Lusaka, Central and hosts Eastern Province played their games on Saturday 29th and Sunday 30th June, 2019 at Chizongwe Secondary School.

Lusaka Province Girls beat Eastern Province Girls 10-00 to lift the trophy while the Boy's category had  the following scorelines which saw Lusaka lift the boy's trophy too.

Apparently, the mininal number of participating Teams did not hinder the competitive nature of the young girls and boys as they played their lungs out much to the delight, admiration and envy of onlookers from other sporting disciplines in attendance.

Other Provincial Teams such as defending champions Copperbelt, North-Western, Luapula, Southern and Western Provinces did not manage to participate in the annual event.

In a related event, the Tag Rugby Trust in association with Get Into Rugby Zambia successfully held annual Tag Rugby u12/14 festivals in Lusaka and Kitwe. The Lusaka event recorded more than 700 boys and girls taking part in trainings from Monday to Friday while only 500+ could be allowed to compete on Saturday 29th June at Linda Open Community School and Linda Grounds respectively.

Meanwhile, the Zambia Rugby Union is pleased with the continued support and partnership with the Tag Rugby Trust. “Since the Tag Rugby Trust came to Zambia in 2006, we have seen great improvements in the levels of skills and game understanding amongst the young girls and boys, which is beneficial to them in their later stages of playing the game at Club, Provincial, National, Continental and International levels”.

“The partnership between the Zambia Rugby Union and the Tag Rugby Trust has seen the introduction of rugby in locations that were previously unexpected to have the game. They have set up a number of Tag Rugby centres in places such as Kitwe, Luanshya, Ndola, Linda, Kafue and Livingstone among others across the country”.