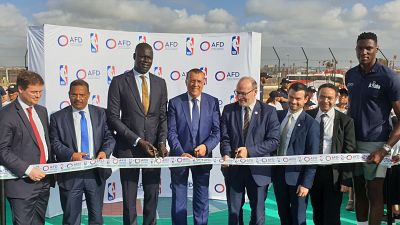 The National Basketball Association (NBA) (https://www.NBA.com/) and the Agence Française de Développement (AFD), France’s inclusive public development bank committed to financing and technical assistance for projects that improve the lives of people in developing and emerging economies, today unveiled a new basketball court in Zenata, Morocco and will expand the NBA’s existing Jr. NBA programming in the country.

As part of the new Jr. NBA Zenata in partnership with AFD, the NBA and AFD today unveiled a new basketball court that is part of the newly-renovated sports park in Zenata. As part of the partnership expansion, the NBA and AFD will also conduct basketball clinics for youth in Zenata that will run through September 2019. Zenata aims to promote integrated and controlled urban and social development within the larger Casablanca metropolitan area to make it a model of a sustainable city. Funded by AFD at 150 million euros, the future ecocity of Zenata is expected to eventually house 300,000 inhabitants and create 100,000 jobs.

“We are thrilled to formally launch the unprecedented partnership between the NBA and AFD as we inaugurate, in Morocco, the very first basketball court of our joint program. We are honored to do so in the presence of the NBA in Zenata. This location was not chosen at random. What better way to build a world in common and embrace Agenda 2030 than leveraging, with the African youth, the unifying power of sport in a sustainable city expressing the will of the Kingdom of Morocco to be at the forefront of sustainable development and social link,” said CEO of the Agence Française de Développement, Rémy Rioux.

”The launch of the new Jr. NBA program in Zenata in partnership with AFD continues our commitment to use the transformative power of sport to positively impact African youth,” said Fall. “We hope that the new basketball court will encourage more young boys and girls in Morocco to play the game of basketball and live healthy, active lifestyles.”

In July 2018, the NBA and AFD announced their plan (https://on.NBA.com/2XCpqtt) to jointly promote social inclusion by developing basketball infrastructure and conducting youth basketball programs, events and initiatives in Côte d’Ivoire, Morocco, Senegal, Nigeria and select other African countries. With sport being an essential part of AFD’s strategy and a major tool for sustainable development, the partnership also aims to combine sport practice with educational training activities to raise awareness among youth on issues including sustainable development, education, health and wellness, citizenship, social inclusion, gender equality, and entrepreneurship.

The Jr. NBA Zenata in partnership with AFD expands Jr. NBA programming in Morocco and builds on the existing Jr. NBA Leagues in Ifrane and Rabat.

The Jr. NBA, the league’s global youth basketball program for boys and girls, teaches the fundamental skills as well as the core values of the game – teamwork, respect, determination and community – at the grassroots level in an effort to help grow and improve the youth basketball experience for players, coaches and parents. This year, the NBA and its teams plan to reach more than 51 million youth in 75 countries through league play, in-school programming, clinics, skills challenges, and other outreach events.

AFD backs France’s conviction that sport is a factor of economic and social development. It is both a real economic driver in terms of creating wealth and jobs, as well as a tool for social ties, unity, and a strong vector for equality between men and women.

In the framework of the overall NBA-AFD project, basketball practices will be regularly offered to young people ages 8-18, who in addition to learning how to play, will also be able to develop life skills.

The NBA has a long history in Africa and opened its African headquarters in Johannesburg, South Africa in 2010. Opening-night rosters for the 2018-19 season featured 13 African-born players, and there are more than 80 current and former NBA players from Africa or with direct family ties to the continent, including Naismith Memorial Basketball Hall of Famers Hakeem Olajuwon (Nigeria) and Dikembe Mutombo (Democratic Republic of the Congo). In August 2019, 10 boys and 10 girls will represent Africa in the second Jr. NBA Global Championship (https://on.NBA.com/31YvlIF), a youth basketball tournament for the top 13- and 14-year-old boys and girls from around the world in Orlando, Fla.

The NBA has held three sold-out Africa Games, in Johannesburg in 2015 and 2017 and in Pretoria in 2018, in support of charities including UNICEF, the Nelson Mandela Foundation and SOS Children’s Villages South Africa (SOSCVSA). Through NBA Cares, the NBA has created 87 places for children and families to live, learn and play in seven African countries.

In February, the NBA and FIBA announced their plan to launch the Basketball Africa League (https://on.NBA.com/2CtYv7d), a new professional league featuring 12 club teams from across Africa scheduled to begin play next year.

Fans can find more NBA information on Facebook (NBA Africa) and Twitter (NBA_Africa). Fans can also download the NBA App, the official app of the NBA, for news and updates, scores, stats, schedules, videos and more.

About AFD:
AFD (https://www.AFD.fr/en) is France’s inclusive public development bank. It commits financing and technical assistance to projects that genuinely improve everyday life, both in developing and emerging countries, and in the French overseas territories. Its action is fully in line with the Sustainable Development Goals (SDGs). Through its network of 85 agencies, AFD operates in 109 countries, where it is currently financing, supervising and supporting over 3,600 development projects. AFD.fr

About the NBA:
The NBA (https://www.NBA.com/) is a global sports and media business built around four professional sports leagues: the National Basketball Association, the Women’s National Basketball Association, the NBA G League and the NBA 2K League. The NBA has established a major international presence with games and programming in 215 countries and territories in 50 languages, and merchandise for sale in more than 100,000 stores in 100 countries on six continents. NBA rosters at the start of the 2018-19 season featured 108 international players from 42 countries and territories. NBA Digital’s assets include NBA TV, NBA.com, the NBA App and NBA League Pass. The NBA has created one of the largest social media communities in the world, with 1.6 billion likes and followers globally across all league, team, and player platforms. Through NBA Cares, the league addresses important social issues by working with internationally recognized youth-serving organizations that support education, youth and family development, and health-related causes. 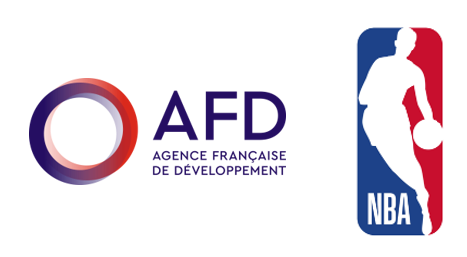 Download logo
The unveiling of the basketball court in Zenata, Morocco as part of the Jr. NBA Zenata in partnership with AFD launch