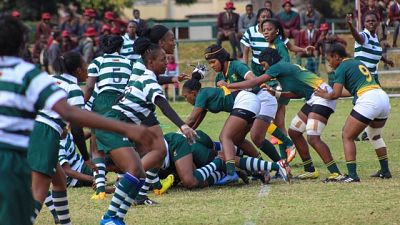 South Africa Under-20 Womens Rugby team had a convincing 43-0 win against Zimbabwe to lead 1-0 in their bilateral two match series at Prince Edward School in Harare.

The visitors struck early with a run away try minutes from the kick off before Zimbabwe had found its footing – Zimbabwe fought hard and regrouped in the first half but still trailed 17-0 at half time.

Zimbabwe showed strong signs of a fight but the South Africans made short work of resistance.

This is the first ever bilateral women’s series at under-20 level between the two nations, one that both nations appreciate dearly.

South African Head Coach Laurian Johannes was pleased with her charges’ performance on game one.

“It is always nice to play in another country, our girls did well but we can improve in certain areas in the next game.

“Thanks to Zimbabwe Rugby Union for inviting us, it will be awesome if Zimbabwe gets to visit us so that we strengthen the relationship between the two countries and ultimately do well for women’s rugby in Africa,” Laurian Johannes.

Zimbabwean Coach Nsikelelo Sibanda was not pleased with the homeside and believes that they mental awareness got the best of them.

“I am disappointed because I thought we had a good side but I think the girls were just rattled and they feared the name South Africa today. The girls took so long to switch on, we made too many mistakes and lost the ball.

“We are training tomorrow, we will have a flat out session and what we are going to do is make a few changes and there are some holes that we want to plug,” said Sibanda.

Zimbabwe will have a chance to level the series in their final match on Saturday at 15:30 hrs at Prince Edward High School in Harare.