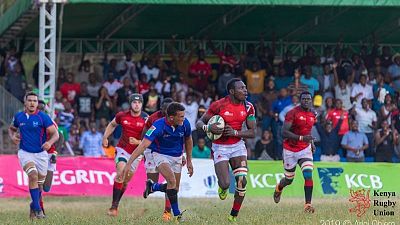 The Kenya U20 delegation traveling to Brazil on 4th July for the World Rugby U20 Trophy Championship has been named by the Head Coach Paul Odera.

The side lifted the Africa U20 Trophy in April at the KCB Sports Club after beating the defending Champions Namibia 21-18. This is the second time Kenya will be featuring in this specific tournament, the first one being in 2009 when we hosted it at the RFUEA Grounds.

The team has since been in session faithfully with a number of the players featuring for their clubs in the Kenya Cup and Enterprise Cup encounters.

Odera has made three changes to the winning side that beat Namibia, Andrew Siminyu, Timothy Okwemba and John Okoth all who missed out on the 2019 Barthes Cup are part of the traveling party. They replace injured Beldad Ogeta and George Maranga who misses the tournament due to academic commitments.

Chipu will be up against fellow upcoming giants, Uruguay, Japan and hosts Brazil during their stay in Sao Paolo. The eventual winner of the tournament will have earned themselves a promotion to the 2020 World Rugby U20 Championship.

“Uruguay have been in this tournament for about seven consecutive years, Japan on paper seem to be the strongest team having been relegated from the U20 Championships. We have had video analysis sessions of this level or rugby, which the current team has not been exposed to before. The pace played by the teams in our pool is going to test us but we’re confident in our defense which is what got us through Namibia,” said Head Coach Paul Odera.

The first match day is Tuesday 9th July when Chipu faces Uruguay at 11:00pm EAT, on Sunday 14th July Chipu will meet the hosts, Brazil at 1:00am EAT before wrapping up their pool matches on Wednesday 17th July at 11:00pm EAT against Japan. All the matches will be played at the Martins Pereira Stadium.