The Zimbabwe Under-20 national women rugby team has secured three commercial partners ahead of the historic bilateral series against South Africa Under-20 Women in Harare.

The young ladies team will be hosting their first international team, South Africa Under-20 in a two match series at Prince Edward High School on the 26th and 29th of June 2019.

Three local commercial partners have come on board to make the series a success, leading TV Production House, Sand Sport Zimbabwe will be the television partners for the series, Enhanced Uniforms Solutions (EUS) the new kit sponsor and the National Blood Services Zimbabwe (NBSZ) are supporting the young womens’ corporate social responsibility drive.

NBSZ Public Affairs Manager Esther Massundah relishes the new partnership that will use rugby as a stimulant for local donations.

On the 14th of June Zimbabwe joined other countries in commemorating World Blood Donor Day, NBSZ have pledged the support for their six blood donor centers in the Chimanimani area that were affected by Cyclone Idai.

There will be a special commemoration at Biriri High School on the 6th of July where the second phase of all donations from the massive campaign will be handed over in Chimanimani.

“Zimbabwe Rugby Union (ZRU) has partnered with the NBSZ encouraging those that are participating and attending the matches to make a contribution by donating a pack of sanitary pads or something for our blood collection sites.

“NBSZ appreciates this initiative that is being spearheaded by the ZRU and we hope that through this support the NBSZ will get support for the contribution that we will be making on the 6th of July,” said Massundah.

Zimbabwe’s Under-20 side will be clad in locally manufactured apparel from their new kit sponsor Enhanced Uniforms Solutions (EUS).

EUS has been came on board as the team’s kit sponsor after news of the ladies success at junior levels in the South Africa Youth Weeks, this year at Under-18 level the girls had two wins and a draw and are now ranked second place behind Western Province in the competition.

They will be providing the ladies with customized shorts and socks.

“EUS is happy to partner with the women's Under-20 Rugby team, we have seen and heard of their successes as under-18 girls and we are very happy to forge a relationship with them in the early stages of their careers.

“We are a high quality brand which will serve the ladies and all rugby players very well on the field,” said Audrey Kupemba, EUS’s General Manager.

Zimbabwean fans will have a chance to watch for the first time, an international under-20 girls series online thanks in a main to Sand Sports which will be broadcast all games on their facebook page https://www.facebook.com/sandsport.sandsport.

Matches will not be streamed live but will be available within 24 hours after they are played.

“Sand Sport is not only excited to be associated with Zimbabwe Rugby Union but the girl’s version of the sport in the country. We endeavour to do more and more for our nation in show casing Zimbabwean Sport.

“It is a great opportunity of the youth of our nation, the Under-20 in particular having two matches in South Africa is something that we feel will be a great spectacle and we are happy to support it.

“We hope the more support give governing bodies with sport the more the corporate world will come on board with time.

“As Sand Sport we with the Under-20s the best of luck for these two matches, it is great for us to have the opportunity to be associated with them, hopefully that we will be able to grow the partnership not only with girl’s rugby but girl’s sport and sports unions across the board and across the country,” said Viljoen. 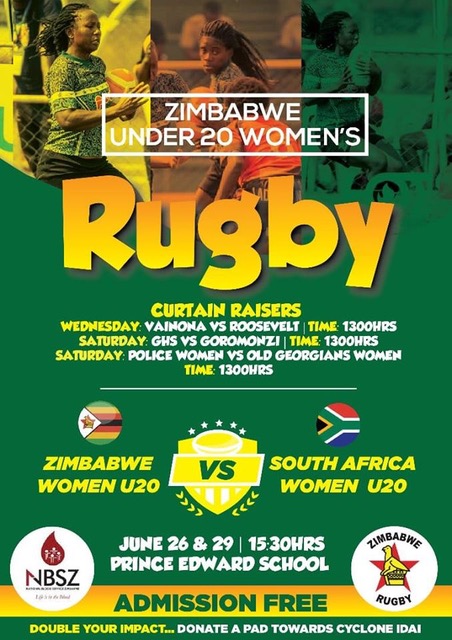