Govt. of Japan avails US$1.5million towards treatment of malnutrition in Sierra Leone

The Government of Japan has approved a supplementary budget of US$1.5million to improve the coverage of critical Severe and Acute Malnutrition treatment services and thereby reduce child mortality in Sierra Leone.

This agreement was formally announced at a project launch officiated by the Minister of Health and Sanitation, Dr. Alpha T Wurie, His Excellency Tsutomu Himeno, Ambassador of Japan and Dr. Hamid El Bashir Ibrahim, UNICEF Representative.

With this grant, UNICEF and the Government of Sierra Leone will implement the project “Addressing critical gaps in the treatment of Severe Acute Malnutrition (SAM) in four high burden districts,” which will see the uninterrupted delivery of critical SAM treatment services in 237 health facilities of Bo, Bombali, Port Loko and Western Urban.

“The Government of Sierra Leone acknowledges the long history of cooperation we have had with the Government of Japan towards meeting our development targets,” said the Minister of Health and Sanitation, Dr. Alpha T Wurie. “This new grant is timely as it will help ensure that the country remains on track to achieve global development goals, including the Sustainable Development Goal 3 to ensure healthy lives and promote wellbeing for all at all ages.”

Sierra Leone’s child mortality rates remain high and this impacts on the progress made to achieve targets of the Sustainable Development Goals by the year 2030.  According to the Multiple Indicator Cluster Survey of 2017, Under-five mortality is 114 per 1,000 live births.  Most of these deaths are a result of undernutrition, which is triggered by household food insecurity, poor infant and young child feeding practices, and poor sanitation and hygiene practices amongst others.

Under this one-year grant, therapeutic supplies, including Ready-to-use Therapeutic Food (RUTF) and Therapeutic Milk will be procured for the treatment of severely acute malnourished children in the target districts.  Another important aspect of the project will be the training, monitoring and supervision of health workers assigned in nutrition treatment sites from the four districts, who will be equipped with new knowledge and skills based on the Integrated Management of Acute Malnutrition (IMAM) national protocol.

“As the Government of Japan, we are aware that any investment in improving children’s nutritional status is a foundation for good health, and to the ultimate development of the country,” said H.E. Tsutomu Himeno, Ambassador of Japan. “This new grant is an indication of our confidence in the efforts of the Government of Japan and UNICEF to support the wellbeing of every child in Sierra Leone and a show of our commitment to be part of the development process of the country. At the TICAD7 which Japan hosts in August this year, health and nutrition will be one of the important issues to be discussed.”

Within Sierra Leone, UNICEF has collaborated with the Government of Japan in support of Sierra Leone’s efforts to improve the lives of children in the areas of water and sanitation, education, child protection and nutrition.

“UNICEF views nutrition as a basic human right which is articulated in key international treaties, including the Convention on the Rights of the Child. Any partnership aimed at the delivery of quality and lasting nutrition results for all children in Sierra Leone is therefore very dear to us,” said UNICEF Representative, Dr. Hamid El Bashir Ibrahim.

Distributed by APO Group on behalf of UNICEF Sierra Leone. 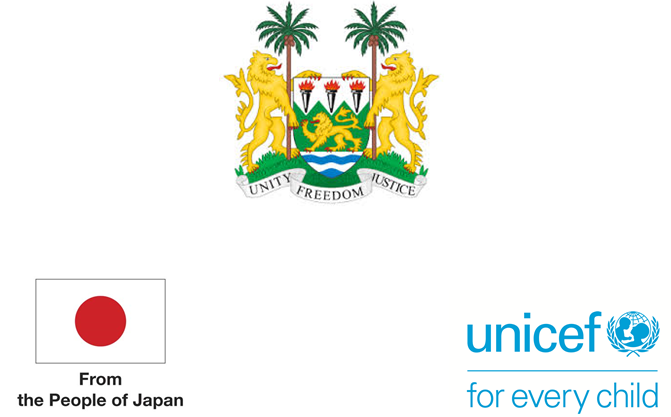