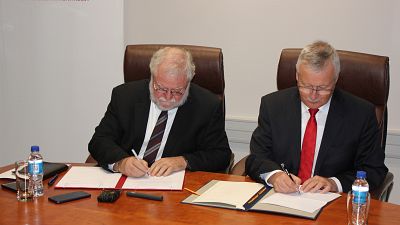 On Monday, 24 June 2019, Hon. Calle Schlettwein, Minister of Finance of the Republic of Namibia, and His Excellency Christian Schlaga, Ambassador of the Federal Republic of Germany signed a Financial Cooperation Agreement on interest-subsidized loans between Germany and Namibia.

The agreement covers programmes to the value of 80 million Euro (roughly 1.3 billion NAD), financing three projects to support the development of water and transport infrastructure as well as financial inclusion in particular in rural areas. The funding for the 3 projects under this agreement is provided by KfW Development Bank.

EUR 20 million (N$ 320 million) will be provided for the completion of Phase 2 of MR44 Swakopmund – Walvis Bay. The completion of this road will give full functionality to the freeway, especially in view of the realisation of the new port facility in Walvis Bay. This will assist in relieving heavy traffic that is bound to inland destinations as well as to countries toward Namibia’s northern borders. This new project is the continuation of the NDP5 Support Programme on Road Maintenance and Rehabilitation jointly implemented by RAl, RFA and KfW; under the same program co-financing has been provided by German Financial Cooperation for the road construction works at Windhoek – Okahandja and Mariental – Grünau.

EUR 40 million (N$ 640 million) will be provided to upgrade the water infrastructure of the City of Windhoek which also includes the construction of an additional Direct Portable Reclamation Plant. To mitigate the challenges of climate change Germany and Namibia will continue their successful cooperation in the water sector which started more than 20 years ago with the financing and construction of the New Goreangab Reclamation Plant. This plant forms the backbone of Windhoek’s water infrastructure nowadays.

EUR 20 million (N$ 320 million) will be provided as long-term  financing  to NamPost in support of lending to Small Enterprises and Low Income Households via its subsidiary NamPost Financial Brokers (PostFin). This will contribute to increase the financial inclusion in particular in rural areas, due to the NamPost’s countrywide presence via its 144 branches and offices. It also enhances entrepreneurship among the poorer, disadvantaged population, especially women and promotes MSE’s.

At the signing ceremony, Hon. Calle Schlettwein, emphasized “that Germany remained a major bilateral development cooperation partner to Namibia despite our country having graduated to an Upper Middle Income Country and other partners reducing or withdrawing their cooperation with us. The targeted uptake of loans does not constitute additional borrowing, but means of funding for budgeted projects. The disbursements provide for local currency arrangement, which eliminates foreign exchange risks.”

His Excellency Mr. Christian Matthias Schlaga, Ambassador of the Federal Republic underlined “that the bilateral development cooperation is a central component of the special relations between Namibia and Germany. Since Namibia's independence in 1990, Germany has continuously supported the Namibian Government in strengthening the country’s social and economic growth. To date, German development cooperation with Namibia amounts to more than 1 billion Euros (roughly 15 billion NAD).”