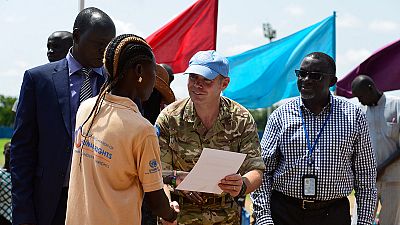 As the world marked the International Day for the Elimination of Conflict-Related Sexual Violence, an audience at the Malakal Stadium were sitting in quiet reflection as they listened to the words spoken by 22-year-old Julia John.

“The last five years of our lives have been hell. We’ve missed school. We’ve gone through many things living at the [UN] protection site.”

Julia’s voice breaks. A long pause follows. She wipes tears from her eyes.

Julia was part of a group of twenty-four young women who recently completed a basic self-defense training as part of peacekeeping mission’s efforts to tackle conflict-related sexual violence.

The goal of the training was to empower women by making them confident in vulnerable situations, enabling them to make the right decision at the right time. Sexual and other forms of gender-based violence are major human rights violations in conflict zones. They tend to increase during post-conflict periods, such as the one South Sudan is currently going through after a recent peace agreement took hold.

Governor Peter Chol Wal emphasized that everyone must work together to make sure that human rights are respected.

“It is a collective responsibility of both the UN and the government to protect women against abuse and any form of sexual violence.”

In South Sudan, both parties to the conflict are accused of committing these atrocities. In Malakal, peacekeepers serving with the United Nations Mission in South Sudan have carried out various awareness raising and capacity building exercises for the elimination of all forms of violence against women.

“We need an enabling environment for those who have survived conflict-related sexual violence to find ways to heal,” said Hazel Dewet, head of the Malakal field office.

“We also need to look at how to best support those who are victims of these aggressions.”

The International Day for the Elimination of Sexual Violence in Conflict is celebrated worldwide to amplify the voices of communities, especially of vulnerable groups such as women, who tend to suffer the most whenever and wherever armed conflicts break out.