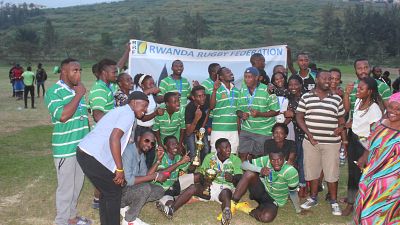 Lions de Fer lifted for the second time the trophy of the Genocide Memorial Sevens Rugby Tournament on Saturday after defeating Ugandan side Rams RFC 14-05 at the final in Kigali Kacyiru Red Cross ground.

“We are very happy that we managed to win the Genocide Memorial tournament title in For the first time. Honestly, we played well and deserved to win. Lion de fer is one of the strong Rugby clubs and  we wanted to prove to them that we are a better team,” explained Kanyamahanga Donath, captain of Lions de Fer.

The Lions had earlier overcome bitter rivals thousand hills RFC 19-12 in a tightly contested encounter in the semi-final to book a berth with the tournament favourites, Rams RFC who earlier thrashed Kigali sharks 21–5.

According to the RRF vice President, Gakirage Philip the tournament has been successfully in organization in time keeping, refereeing, and I would like also to congratulate all the teams that participated in the event especially Rams RFC from Uganda and okapi Goma RFC from Republic Democratic of Congo and all local clubs that participated in year’s Genocide Memorial Tournament the Rwanda Rugby Federation is looking forward to make this tournament bigger to attract so many Rugby teams in regions.

Meanwhile, Lions de Fer’s scrumhalf Ikorikwishatse Patrict was named the Most Valuable Player of the game.