Rwanda - Rugby: 25th commemoration of the Genocide against the Tutsi 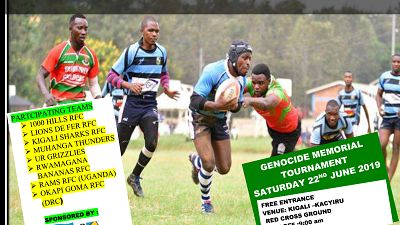 The Rugby fraternity will join the rest of the country in the 25th commemoration of the Genocide against the Tutsi by holding a Rugby memorial 7’s which will take place on  Saturday June 22nd , 2019 at kacyiru Red cross ground.

The one-day competition will be contested by six domestic teams, one team from the Democratic Republic of Congo (Okapi Goma RFC) and one side from neighbours Uganda (RAMS RFC).

According to Tharcisse Kamanda, the President  of Rwanda Rugby Federation (RRF), the preparations for the event are in advanced stages and teams should expect stiff competition following the registration of foreign participants.

“This year’s tournament will be more entertaining for spectators and more competitive for participants since we have some teams from Uganda and DR Congo. So far so good in the preparations for the event,”

The tourney is organized every year, since 2013, in memory of members of the sports community who were killed during the 1994 Genocide against the Tutsi.

Download logo
Rwanda – Rugby: 25th commemoration of the Genocide against the Tutsi