As The Sun Rises, The Water Flows: A Green Humanitarian Response in South Sudan 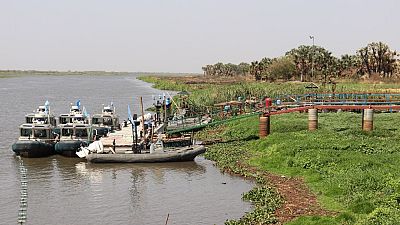 The town of Malakal sits on the East bank of the Nile River in South Sudan’s Upper Nile State- a country where the sun’s rays never cease.

In 2013, armed groups attacked communities in Upper Nile, causing thousands of people to flee to the nearest place of refuge: a UN-protected base in Malakal. In its response to the displacement, the International Organization for Migration’s (IOM) top priority was providing safe and clean water to the population.

At the beginning of the crisis, the Organization trucked in water and later began pumping water from the Nile with diesel-run generators.

Last year, IOM’s water, sanitation and health (WASH) teams soon began to tap into the potential of the nearby river and the sun — renewable resources that could greatly reduce the environmental footprint of the Organization’s humanitarian operations.

Teams designed a hybrid, solar power system that extracts half a million litres of water per day from the Nile to provide a more sustainable water source.

“Since last June, IOM has been able to supply the required amount of water for its humanitarian operations at a lower cost with a much smaller environmental footprint due to the drastic reduction in fuel consumption. We hope this model can be used in similar contexts to ensure greater sustainability in humanitarian interventions globally,” said Patrick Mutonga, IOM WASH Project Officer in Malakal.

While the sun shines during daylight in Malakal, a solar-run, 11-kilowatt pump extracts water from the river intake area before pumping it through a 2,040 metres-long pipeline to a treatment plant where water is filtered, stored, tested and treated. WASH technicians then ensure the water is safe for consumption before distribution.

The water collected serves the entire population of the Malakal Protection of Civilians site, estimated to be around 29,000 residents, providing approximately 20 litres of water to each PoC resident daily. The solar-powered system also supplies the entire Humanitarian Hub, where more than 300 humanitarian workers live, with clean water.

“We are also supporting clinics, churches, schools in the PoC other than people and we are searching for funding to eventually resuscitate in Malakal town. When the Protection of Civilians site closes and people return to their areas of origin, we can dismantle the system and use it anywhere along the Nile where a pipeline has been built,” said Mutonga.

He added that by the end of 2019, the project will break even making up the costs of the initial investment in the infrastructure from the savings on transportation and diesel fuel.

Solar water pumping is considered the most appropriate approach to reduce recurrent operating costs and to enable more sustainable water provision. In Africa and Asia, where fuel can be expensive as transport and access to water points is limited, solar photovoltaic pumping is a cost-effective solution.

Since May 2016, IOM, in partnership with OXFAM, have been implementing ‘The Global Solar and Water Initiative’ which aims to mainstream the use of solar-powered water systems across the WASH humanitarian sector in displacement settings.

The Organization’s investment in solar power in Malakal, made possible with funding from the Office of US Foreign Disaster Assistance (OFDA), ensures IOM’s humanitarian response in South Sudan is sustainable. Another solar project with the Norwegian company, Scatec Solar, will provide the entire Humanitarian Hub with clean energy by the start of 2020