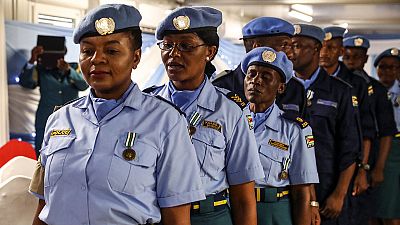 Zimbabwe’s Emma Madziva stands at attention as a medal is pinned on her left breast pocket, just next to her name tag.

“It shows how hard we have worked in this place [South Sudan],” she says, referring to various tasks she has been engaged in over the last eight months in Africa’s youngest country.

“I was working as a patrols officer before, but I now work on the gender desk, occupied in resolving issues around domestic violence, early and forced marriages, rapes, and everything else that is classified under Gender and Children Vulnerable People Protection (GCVPP),” says Madziva.

According to Madziva, working in the largest protection of civilians site and explaining to the population that various forms of violence against women and children are not acceptable, is a monumental challenge in a community which does not abhor the vice.

“We work explaining to the people that various forms of violence against either gender and children does not only occur between husband and wife, but may extend to family members, neigbours and relatives,” she says.

“Sometimes the victims [who come to us] cannot explain themselves. You only see them tearing up, and you know they are in some sort of pain,” says Madziva. “I feel pity for them, but we are able to help them resolve some of their problems,” says the 35-year-old, who is now a front-runner in the girl-child education amongst the displaced.

She says she tells them that girls will improve the future of the nation.

“We sensitise women to support and educate the girl child,” says Madziva who is now encouraged to see girls attending school and able to learn English, which they now use easily as a common language of communication.

Madziva, a mother of one, hopes that those she serves can one day have a say that will turn their fortunes by giving opportunities to women and girls who have not had many an opportunity.

She says she is happy to have been able to compete with men to earn her stripes under her current role, which the United Nations globally encourages.
In late 2017, UN Secretary-General António Guterres launched a gender parity strategy aimed at increasing the recruitment and advancement of women within the United Nations.

Indeed, Madziva is now among 16 women who have turned the gender tables in peacekeeping in South Sudan.

“We should not differentiate between men and women. Women are not often given the chance to be in the same position as men. Sometimes they have no say,” says the new medal recipient,” who briefly tears as she recounts a personal tragedy in which her husband died, leaving her to raise their only child as a single parent.

The contribution of women like Madziva to changing the image of UN peacekeeping is easily recognizable now within the UN Mission in South Sudan (UNMISS).
“It is very gratifying to know that there is almost gender parity. We are very proud. Female personnel are crucial to our work,” says the UNMISS Chief of Staff, Paul Egunsola.

Of the thirty Zimbabweans from the UN Police who received medals for their gallant efforts in South Sudan, Madziva’s group is also the largest contingent of UN Police to have served in the country.

It is a proud moment for them and the United Nations alike.