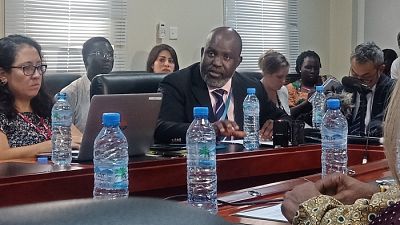 South Sudan’s Ministry of Health on Thursday launched an appeal for 12 million US dollars to help in its Ebola preparedness plan, following news of confirmed Ebola cases in neighbouring Uganda.

“Ebola does not know borders,” said Minister of Health, Riek Gai Kok speaking to journalists in the presence of various donors, the diplomatic community and other humanitarian organisations.

They have all been involved in the preparedness plan, which was initiated in August 2018 after Ebola was reported in neigbouring Democratic Republic of the Congo (DRC).

The three confirmed cases in Uganda were of victims who had entered the East African country from the DRC through the Kasese border – a 10-hour bus ride from South Sudan’s border, only 600 kilometers away.

“The country is at very high risk,” said the health minister, who while launching the national preparedness plan said the country had “to prevent even one single case.”

The minister also used the opportunity to reassure the public in South Sudan.

“There is no outbreak; there is no case of Ebola in South Sudan [now]. The country is safe,” he reaffirmed.

“There is no need to panic,” he continued. “We are on top of things,” he added saying that this confidence would not have been possible without the donor funding the country has received so far to help in various preventative and surveillance efforts.

Between August 2018 and May 2019, when the country initiated its first preparedness plan, 16 million USD had been sought, of which 13 million had been received.

“We did not have the capacity [before], but we are confident we can face the challenge,” said Gai Kok.

In a presentation at the launch of the prevention plan held at the country’s Public Health Emergency Operation Centre, the country’s Incident Manager at the Ministry of Health, Dr Richard Lako, said the new 12-million-dollar six-month plan would seek to take urgent steps to make sure the country can respond if Ebola crosses into its borders.

“We are urgently appealing to donors to keep South Sudan Ebola free. Investing in prevention is the smartest thing to do,” said Lako adding that the improvement of the existing surveillance, scaling up of training and expanding community mobilization, and a 72-hour response time, among other things were important.

Announcing various measures that have been put in place, the World Health Organisation (WHO) representative in the country said there were 25-30 points of entry, including the Juba International Airport, where a number of isolation and holding units have been installed in the event of any reported cases.

“There is need for us to have that concerted effort to sustain what we have achieved. It is important for us to keep the momentum up,” said Dr Olushayo Oluseun from WHO.