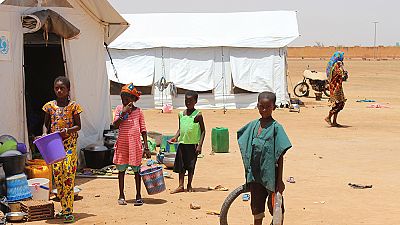 The deadly attack on Sunday (09/06) in the village of Sobane in central Mali, which killed 35 villagers – and 60 are still missing – continues to displace people to Mopti, one of the largest towns in central Mali.

Four days after the attack, more than 100 internally displaced persons (IDPs) from Sobane had already been registered by officers of Mopti’s Regional Directorate for Social Development (DRDS). This number comes on top of the almost 50,000 IDPs, of which 58 per cent are children, already registered in the cities of Mopti, Sévaré and Fotama, in central Mali, since January 2019.

These IDPs have all fled inter-communal violence to seek shelter from host populations, which are struggling to meet the IDPs’ basic needs.

“One night, while I was in Bamako, my eldest son called to inform me about the arrival at home of families saying that their villages had been attacked, ransacked and burned out and that they had left everything behind to seek refuge in,” Hawa explains.

Hawa, a teacher and mother of three, has sheltered in her house in Mopti, in central Mali, 172 IDPs who have fled intercommunal conflicts in March 2019.

“We are in need of food, water, tents because people keep coming,” she adds.

The 711 IDPs already registered since March 2019 on the site of Soukoura, the IDP camp run by the Government of Mali, in Mopti region, and the IDPs living in makeshift camps (such as that of Hawa’s family) have already received immediate assistance.

But this assistance is not enough anymore as internal displacements continue.

“There is an urgent need to address water and sanitation issues as well as problems posed by the rainy season and flooding which present a threat to these displaced persons,” says Boubacar Diallo, Head of Social Protection Division at the Regional Directorate of Social Development and Economy in Mopti.

“The situation requires our attention in terms of food, water, sanitation and shelter provisions. We must coordinate our actions and strengthen our response capacity to address these emergencies,” said Pascal Reyntjens, Chief of Mission of IOM Mali.

Starting next week, IOM will provide 50 tents with a capacity of 10 people per tent and is ready to strengthen the DRDS IDP profiling team.

Since 2012, the humanitarian situation in the country is very volatile due to the growing insecurity caused by inter-communal conflicts and violent attacks against civilians in the North and Centre of the country.

Since 2012, IOM Mali has been working in Mopti region by addressing IDPs’ needs through the provision of shelter, water, and sanitation. As part of community stabilization projects, IOM has already built a multifunctional centre for women in Konna, rehabilitated the Community Health Centres (CSCOM) of Debere, Hombori and Diona in Douentza, as well as schools in Kourarou, Hombori and Youwarou.