“Tomorrow morning Europe’s finance ministers will meet as Governors of the EIB and discuss how we can accelerate climate action as we expand economic opportunities and improve social infrastructure. Climate has become a key priority for us all, and the projects we approved today show that the EIB takes its role as Europe’s climate bank very seriously.” said Werner Hoyer, President of the European Investment Bank.

The EIB Board of Directors held its monthly meeting today in Luxembourg.

This includes backing new solar power in Zambia and wind farms in Portugal, energy efficiency projects in Lebanon and Jordan and support for rural communities across Niger to access clean energy.

The EIB also agreed to support two new financing programmes with leading French banks to speed up the energy transition by encouraging greater use of renewable energy and more efficiency energy use by local companies.

More than 3,000 schools across Italy will be upgraded in the coming years following EIB approval of more than EUR 1.3 billion of new financing for the National School Infrastructure Plan.

The EIB approved EUR 1.6 billion of financing to help companies to innovate, expand and create jobs.

This includes investment that addresses challenges facing female entrepreneurs in Poland and across Africa, supports lease financing in Italy, backs venture capital in Liberia and Sierra Leone and encourages new agri-business and renewable energy investment in Greece, Bulgaria and Romania.

The EIB also agreed to support new water and water investment across France and improve flood protection in the Irish city of Cork.

The EIB also agreed to support new investment to upgrade the sewage network in Skopje, the capital of northern Macedonia.

Financing for six projects approved by the EIB board today will be guaranteed by the European Fund for Strategic Investments (EFSI). 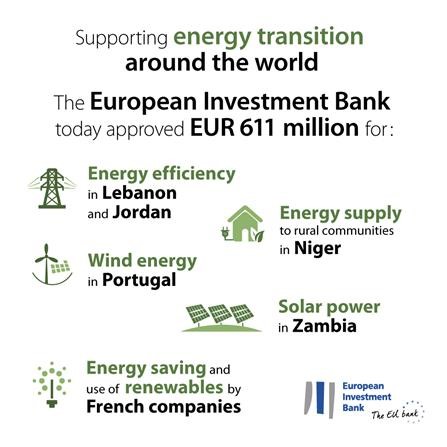