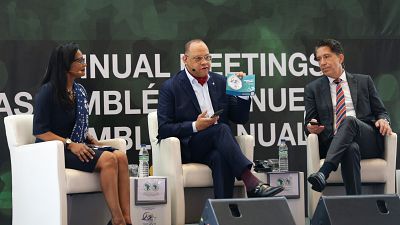 In 2018, the Bank earned $214 million in allocable income, 48% of which has been reinvested in the institution to reinforce reserves and its business growth capacity. The bullish numbers were revealed during the Bank’s Financial presentation Thursday, a highlight of the 2019 Annual Meetings of the Bank currently underway in Malabo, Equatorial Guinea.

The panel was led by N’sele and Simon Mizrahi, Director of Service Delivery, Performance Management and Results at the Bank.

During the presentation attended by delegates, Governors, Executive Directors and Bank staff, N’Sele noted that the Bank could chart a new path on account of its ability to raise funds on the capital markets. “The amount of infrastructure financing covered by private sector could double if African countries harness the full potential of their capital markets.”

According to N'sele, a number of African countries could save as much $1 billion on a 20-year loan, if they borrow from the African Development Bank, instead of from the Eurobond market, due to preferable lending rates.

Delegates were informed of the Bank’s successful issuance of the first-ever NOK social bond sold in Norway and sealed in 2018.

Despite challenges, Africa’s debt is still under control

On debt sustainability, Africa’s debt has increased in recent years “but not to unsustainable levels,” Mizrahi indicated but he pleaded for caution. “We need to continue to generate financing and spur growth without increasing debt.”

Africa is the most vulnerable continent and suffers the most from climate change but “with the right vision, investments and political commitments, Africa can lead a global energy revolution and leapfrog to renewable technologies.  This is why the Bank is putting its money where its mouth is and investing more than any other development Bank in helping the continent transition towards more resilient and sustainable economies,” he concluded.

According to Mizrahi, AfCTA paves the way to the world’s largest free trade area with an integrated market of 1.3 billion consumers.

“This is important because Africa will struggle to be competitive at the global scale, if it continues to operate as 54 fragmented economies. The continent needs to be more integrated, it needs larger economic spaces so that Africa can attract more investors, create more and better jobs, boost internal trade and create continent-wide value chains that are globally competitive.”

The panel moderated by the Victor Oladokun, the Bank's Director of Communication, noted that AfCFTA is expected to boost cross-border infrastructure, drive competitiveness and make the continent a smaller place by integrating markets.

In her concluding remarks, N’sele expressed the Bank’s appreciation for Canada’s unwavering support to the institution with the recently announced $1.1 billion callable capital. “This will allow to continue to meet our financial ratio” before a decision is made on the 7th General Capital Increase,” she said.

We are, the continent’s only triple-A rated institution. Our rating means that our bonds are the absolute safest in the world. It gives confidence to investors across the globe that their investment in African Development Bank bonds is secured.”