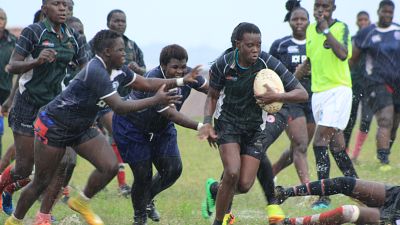 The 2019 Uganda Rugby (http://UgandaRugby.com) ladies league that started on 4th May will be postponed briefly as the Ladycranes XV’s intensify their preparations for their away match against Kenya Lionesses on the 22/06/2019 in Kisumu city.

National team takes priority over the league and fortunately the clubs understand and are supportive of this call as we need to prepare for World Cup Women’s Qualifiers that are due from the 9-17th August in Johannesburg, South Africa.

The league that is comprised of four teams that is Thunderbirds, Black Pearls, Entebbe Lady Swans and Mbale Eagles has been a good platform for the selection of the training squad for the Ladycranes XV’s team. It was initially supposed to comprise of 6 teams but due to logistical challenges and limited numbers from Kitgum queens and Black Panthers respectively, the league had to take off with the registered teams.

Thunderbirds, Entebbe Lady Swans and Mbale Eagles have 2 games each in hand after the three clubs agreed to postpone due to logistical and administrative challenges especially for Mbale Eagles who are the upcountry team taking part in this tournament.

“It is always a big battle between Black Pearls and Thunderbirds but I give glory and honor to God for this win. I am so grateful and proud of the team because we trailing but came back stronger in the second half to win the game “- Atyang Winnie, Captain-Thunderbirds

The clubs will meet shortly under the stewardship of the board member for Women’s rugby Mrs. Regina Lunyolo to discuss how to reorganize the games in light of the Elgon Cup games and will come up with an agreed position after this.