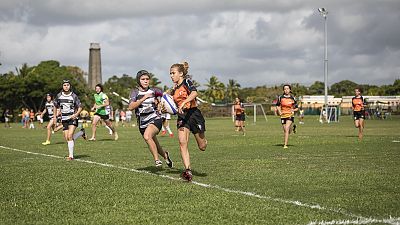 +100 Girls played rugby on Saturday 08 June during the Scott Women’s 7s international tournament, Seniors & Academy. The favorites of the tournament, St-Pierre Rugby Club of Reunion island confirmed their supremacy and triumphed against the Northern Pirates Rugby Club of Mauritius in the finals.

This is how Women Rugby is currently the fastest growing sport in Mauritius. The SCOTT Women’s 7s International Rugby tournament was the biggest audience ever for women rugby in Mauritius. Five Seniors teams played each other in the pool games and the title decider was held in the final play-offs. The tournament was won by St Pierre Rugby Club from Réunion island who dominated the tournament and showed great skills and attitude.

The development of rugby and women rugby in Mauritius is facing an exponential growth since the creation of new clubs created in 2018. As part of the Mauritius2024 program, the young players from the rugby women academy played some exhibition games in between the official seniors’ matches. The rookies from Rodrigues Is. and Port Louis Sailors showed tremendous progress and fighting spirit during their matches against the Northern Pirates Chicks and Western Cowgirls.

The Director of Rugby Jean-Baptiste Gobelet was very proud and surprised at the same time to see how women rugby has been growing in Mauritius lately. He commended the participation of over 100 rugby players at the tournament and emphasized the importance of such meets for the development of rugby: “It was a brilliant day of rugby, all the clubs of the islands participated even Rodrigues and a club from Reunion Island, St Pierre. Girls showed great skills, determination and fair-play. We believe that the development of women rugby in the Indian Ocean need events like this one, we look forward to grow this international club tournament every year. Today 8 teams of women which are each in different phases of evolution took part in the tournament.  5 seniors’ clubs, along with 3 Academy clubs (U16) which started their development program just 4-6 months ago. I am very pleased to see their motivation and improvements game after game.”

He added that women rugby is more and more popular in Mauritius: “We’ve receiving sign-ups from parents for their girls each week to join rugby club. This shows that we are definitely reaching all communities of Mauritius to get them involved in playing rugby. The future of women rugby in Mauritius is very bright, we launched an ambitious rugby program with Mauritius2024 since 2018 and we are very happy to see how girls are committed and aligned with our vision for this project.”

Youth and women rugby is a priority program of the Rugby Union Mauritius (www.Mauritius.Rugby) for the next three years as explained by the Director of Rugby: “Our next goal is the Youth Olympic Games in 2022 which will be held for the first time in Africa (Dakar2022). After the bronze medal with the U18 academy men side in the Youth African Games in 2018, this is going to be a great opportunity to work with the next generation of 2004s and 2005s in order to prepare a youth men and women team for 2022. We are already putting in place a schedule for our youth girls team since 8 months in preparation for the YOG2022, the main objective is to get a medal for YAG2022 and qualify both our men and women team for the YOG2022 which will be a springboard for our Mauritius2024 Olympic program in which we wish to qualify our Mauritius national team for Paris2024 for the first time of history. Our girls are unstoppable, their motivation limitless. The Olympic dream is on and our plans are in order. So let’s now put in action our plans and write history together!”