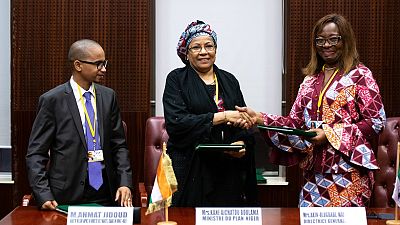 The Republic of Niger and the African Development Bank (www.AfDB.org) on Tuesday signed a $128.8 million financing agreement to support the “Kandadji” project for the regeneration of ecosystems and the development of the Niger Valley (PA-KRESMIN).

Nigerien Minister of Planning Aïchatou Kane Boulama, who signed on behalf of Niger’s Government, expressed her gratitude to the Bank and praised the leadership shown by it in the process leading to the  “Kandadji” signing.

“We would like to acknowledge the Bank's strong commitment to this very important project for the people of Niger. The signing of this agreement is a step towards its realisation, but also towards the restoration of Niger’s river ecosystem and the development of thousands of hectares of irrigated land of local communities, not only in the Tilabéry region, but all over the country”, said Boulama. The minister was accompanied by the deputy minister in charge of the Budget, Ahmat Jidoud.

“It's a 100-year-old dream that is finally becoming reality and we are happy to have contributed,” said Marie-Laure Akin-Olugbade, African Development Bank Director General for West Africa. She continued, “we stand by you and we shall remain by your side”.

The implementation of the “Kandadji” project will take six years (2019-2025) and involves the completion of a multi-purpose dam that will create a real development hub in the region of Tilabéry, one of the most vulnerable regions in Niger, with three million inhabitants.

The Bank’s financing includes a $65.1 million loan, a $49.7 million grant from the African Development Fund (ADF) and a $14 million loan from the Transitional Support Facility (TSF).