Senior Rwandan military in Aweil: Peacekeepers are the eyes and ears of the United Nations (by Emmanuel Kele) 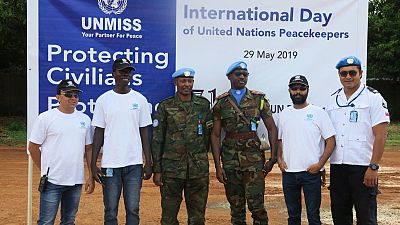 He has experienced war in his native Rwanda, and now he is serving as a UN peacekeeper in the war-torn country of South Sudan.

Lieutenant Colonel Venant Bizimungu’s 32-year-long military career has seen him deployed thrice in peacekeeping missions, with the first two of his tours of duty having taken place in Darfur, Sudan. Currently based in Aweil in South Sudan’s Northern Bahr-el-Ghazal region, he has a message for peacekeepers around the world.

“We are the eyes and ears of the United Nations. We must work hard to beat the voice of those involve in conflicts.”

Honouring the memory of individual peacekeepers who have fallen in the line of duty is main objective on the International Day of UN Peacekeepers, celebrated every year on 29 May.  Lieutenant Colonel Bizimungu believes that it is a tradition that must be upheld.

“It is my day and I am happy to pay tribute to those who have lost their lives while making peace,” says the Rwandan, who has a wife and four children back home in Kigali.

As a military observer, Bizimungu conducts routine patrols in Aweil town to see whether there are any sectional conflicts going on or not before filing his reports. Based on his observations and vast experience, he advises local authorities on how to prevent or mitigate conflict.

“I am happy to be a peacekeeper because of what my country went through, says the 50-year old Rwandan soldier. “I am here to assist my fellow Africans-the South Sudanese in achieving peace.”

The warring parties in South Sudan signed the revitalized peace agreement in September last year, hoping to put an end to the country’s more than five-year-long conflict.

Bizimungu, a military man since he 1987, is hopeful of not only contributing to lasting peace in South Sudan but also in any other place where is expertise may be called upon.

“I am ready to serve as a peacekeeper at any time and in any location, because that’s my job.”

As for now, he will continue to give his all in Aweil till August, when his tenure expires.

Download logo
Senior Rwandan military in Aweil: Peacekeepers are the eyes and ears of the United Nations (by Emmanuel Kele)