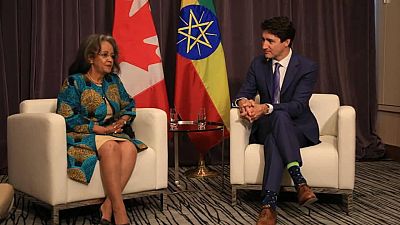 Ethiopia and Canada expressed their readiness to foster their bilateral and partnership relations, Office of the President disclosed.

President Sahle-Work Zewde met Canadian Prime Minister, Justin Trudeau in Vancouver, Canada, on June 5/2019 in which, the two sides have agreed to further strengthen bilateral ties between Ethiopia and Canada.

President Sahelework said that Canada has been a true and strong partner of Ethiopia even in times of intricacies.

The President further noted the importance of strengthening the bilateral economic cooperation between the two countries.

The Prime Minister Justin Trudeau expressed his appreciation for the President Sahlework’s attendance at the Women Deliver 2019 Conference and for her leadership on advancing gender equality for Ethiopians.

The two leaders discussed the importance of investing in grassroots women’s organizations to drive lasting change and welcomed the launch of the Equality Fund.

The Prime Minister noted Ethiopia’s continued commitment to building peace in the Horn of Africa, making a strong contribution to stability and prosperity in the region.

President Sahlework and Premier Trudeau talk of their shared commitment to advancing Women, Peace and Security and support for the Elsie Initiative.

Prime Minister Trudeau welcomed the recent significant reforms and transformation in Ethiopia and took note of the elections planned for 2020.

They discussed the importance of investing in infrastructure to support growth and change.

The two leaders noted the deep and warm relationship between Canada and Ethiopia, reflected in strong people-to-people ties and shared values of diversity and inclusion.

Both leaders agreed to strengthen bilateral cooperation and committed to staying in close contact.

Distributed by APO Group on behalf of Embassy of the Federal Democratic Republic of Ethiopia, Ottawa, Canada.
Media files