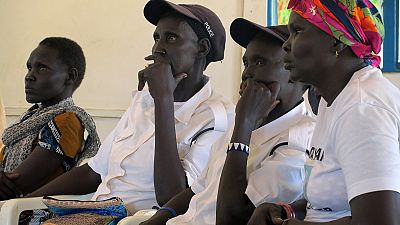 When a group of UN police officers in Bor realized that most of their female South Sudanese colleagues could not read, speak or write English and hence were relegated to making tea for their male coworkers, they decided to act.

The UN police officers, serving with the United Nations Mission in South Sudan, are now contributing money to pay local tutors to teach more than 140 local policewomen in Jonglei basic communication and writing skills in English.

“I am a traffic police officer. If I learn English, I will be able to read my letters, take note of number plates and investigate accidents,” said Rachael Adau Abit, one of the training participants.

She has never attended school and believes that this is why she finds herself being a traffic police officer instead of doing office work. She is relishing this opportunity to make up for lost time.

“It will be an eye opener for me. For example, if something begins with the letter R, I will know what it is,” she said.

“Our [UN] police commissioner is always advocating for South Sudan policewomen to be promoted. But how can you be promoted if you do not know English? That is why we are here and doing what we are doing,” says Ms. Nabutono.

Tutors of the ministry of education will spend the next two months teaching a first batch of female officers. Once they graduate, a second group of women will commence their journey with destination English literacy.

“Everybody want to be educated. We must know ABC just like our children. We can be empowered through education. Now women who went to school are benefiting from their education. We also want to progress, just like them,” says Martha Agum Manyiel, another keen learner.

Because of the wide-spread illiteracy among South Sudanese policewomen, their male colleagues also handle the sensitive but all-to-common cases of sexual and gender-based violence.

Female victims tend to find it hard to report such intimate matters in the best of circumstances and having to discuss them with men makes denouncing these crimes even less likely.

“It is not good practice, it is unprofessional and should change,” says UN police advisor Innocent Kimenyi.

The language-learning project has been made possible through an agreement between the UN police, the local department of the South Sudan National Police Service and the ministry of interior.

Police officers serving with the peacekeeping mission are planning to extend the training to include best practices for community policing, investigative techniques and case file management.