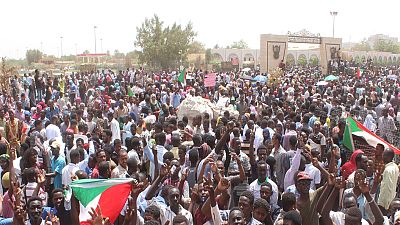 Security forces in Sudan fired on pro-democracy protesters in the capital Khartoum on Monday, leaving a number of dead and many more injured, prompting the United Nations chief’s condemnation and an appeal for “peaceful dialogue” to resume.

Secretary-General António Guterres “strongly condemns the violence” and “the use of force to disperse the protestors at the sit-in site”, said a statement issued by his Spokesperson, adding he was also alarmed at reports that “security forces have opened fire inside medical facilities”.

Mr. Guterres reminded the Transitional Military Council of its responsibility for “the safety and security of the citizens of Sudan”, and urged all parties to “act with utmost restraint”, including their responsibility to uphold “the human rights of all citizens, including the right to freedom of assembly and of expression”

He also called for “unimpeded access to deliver essential care” at the sit-in site outside army headquarters in the capital Khartoum, and in hospitals “where the wounded are treated” and urged the Sudanese authorities to “facilitate an independent investigation into the deaths and to hold those responsible accountable”.

“The Secretary-General urges the parties to pursue peaceful dialogue and to stay the course in the negotiations over the transfer of power to a civilian-led transitional authority, as required by the African Union (AU)”, the statement continued.

It concluded with the UN chief’s commitment to working with the AU in support of the process, saying that the UN “stands ready to support the Sudanese stakeholders in their efforts to build lasting peace”.

For her part, High Commissioner for Human Rights Michelle Bachelet called the peaceful demonstrations in Sudan “an inspiration” as the protesters worked “to engage with the Transitional Military Council”.

“I utterly deplore the apparent use of excessive force in the protest camps” she said.

Ms. Bachelet noted that reports stating that live ammunition was used by security forces next to, and even inside, medical facilities are “extremely alarming”.

“I urge the security forces to immediately halt such attacks, and to ensure safe, unimpeded access to medical care for all”, she asserted.

Ms. Bachelet stressed that “those exercising their rights to freedom of peaceful assembly and expression must be protected, not targeted or detained”, calling it “a fundamental tenet of international human rights law”.

“The use of excessive force must be promptly and independently investigated and those responsible brought to justice” she spelled out, adding that the human rights violations that have marked Sudan’s history, and sparked the sustained protests over the past six months, “must not be allowed to continue”.

“This is a real setback”, she concluded.

When the three-decade autocratic rule of President Omar al-Bashir ended in a military takeover in April, hope sprung anew in the African nation. However, as talks faltered between the ruling Transitional Military Council and protesters’ leaders over the timetable for civilian rule, violence ensued.