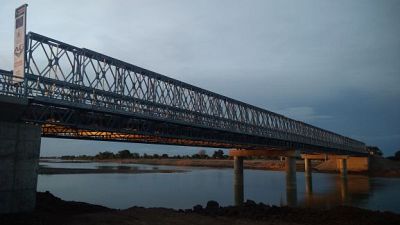 The United Nations World Food Programme (WFP) and the European Union have today officially handed over the completed Kwacjok Bridge to the Government of South Sudan that links Lunyaker, Kwacjok and Kangi regions for long separated by the Jur River.

The 120-metre long bridge is part of a €20.3 million (US$ 24.8 million) European Union-funded project to construct and maintain a total 100 kilometres of road infrastructure in Warrap and Western Bahr el Ghazal states.

Built at a total cost of US$6.5 million, the bridge will connect tens of thousands of people and is key not only for humanitarian operations but is expected to boost farm-to-market access and commercial activities in the region as well.

“The project is more than just a bridge,” says Rebecca Okwaci, Minister of Roads and Bridges. “This is an investment in various sectors of South Sudan including education, agriculture, health, transport and tourism.”

Construction, undertaken in phases since January 2018, consisted of a reinforced concrete sub-structure based on piled foundations, the supply and installation of the prefabricated bridge superstructure and development of seven kilometres of approach roads.

Led by a construction firm under the supervision of WFP engineering teams, up to 80 local people were employed as workers, including electricians, welders, equipment operators, and drivers, creating much-needed job opportunities.

“This bridge is part of a larger infrastructure investment programme which has been continuously supported by the European Union, since 2012, with a significant financial contribution of over €58 million,” says EU Ambassador to South Sudan Dr Sinead Walsh.

“I am proud to see how effectively the EU funds have been channelled for the benefit of the end users and the communities of this region and I reaffirm that the EU will stand with the South Sudanese people on their path towards peace, stability, security and prosperity.”

South Sudan has a road network of over 20,000 kilometres, but only 200 kilometres is paved. Decades of conflict and years of neglect have stunted infrastructure development in the country. Road travel is therefore difficult with 60 percent of the country inaccessible during the six-month long rainy season from June to November every year.

“The project will transform the dynamics of transportation in surrounding communities, and counties,” says Ronald Sibanda, WFP’s Country Director in South Sudan. “As well as improving the movement of goods and people, the bridge lays a strong foundation for the socio-economic growth of the region by facilitating regional trade and community integration across the river.”

The Kwacjok Bridge is the latest WFP engineering project in South Sudan. Since 2013, WFP has completed the construction and upgrade of more than 500 kilometres of roads and built 30 structures including culverts and bridges across Central, Eastern and Western Equatoria, Warrap and Western Bahr el Gazal.