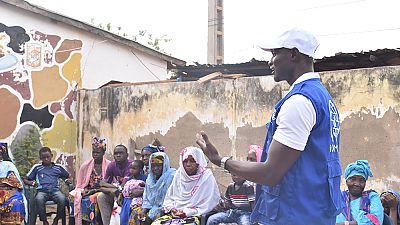 In an effort to strengthen the psychosocial reintegration of returnees and promote universal access to healthcare in their communities, the International Organization for Migration (IOM) has launched a mobile health caravan initiative in The Gambia.

Launched in Farafenni (North Bank Region) and Brikama (West Coast Region), the initiative was designed to address the medical and psychosocial concerns of returnees who often return from difficult and traumatic experiences, and their communities, who are equally impacted by the departure or loss of lives of their families and friends.

Returnees identified with medical or psychosocial needs are followed up by IOM staff and referred to relevant health authorities.

“When we come back, many people see us as failures. It can make us feel unwelcome in our families and communities,” remarked Muhammed, a returnee from Libya.

This initiative came as a result of an analysis of conflict drivers in The Gambia conducted by the United Nations Peacebuilding Support Office, in which the stigma and negative perceptions faced by returnees were identified.

The caravans were designed to include communities in the reintegration process.

The first two caravans are the beginning of a series of 10 planned events, which will all take place in communities with the highest number of returnees. Prior to each caravan, health volunteers in the community are trained on the provision of psychological first aid and basic counselling skills.

Since the launch of the EU-IOM Joint Initiative for Migrant Protection and Reintegration in 2017, close to 4,000 Gambian returnees received post-arrival reception and reintegration assistance.

This Mobile Health Caravans initiative forms part of Strengthening the Sustainable and Holistic Reintegration of Returnees, a project funded by the UN Peacebuilding Fund and implemented in collaboration with the International Trade Centre, the UN Population Fund, and the World Health Organization.