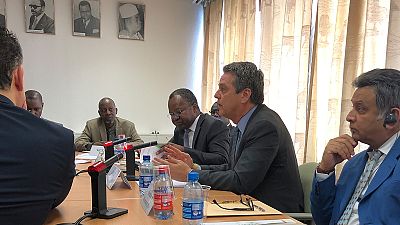 Addressing the African Group of WTO members in Geneva on 3 June, Director-General Roberto Azevêdo stressed his commitment to supporting Africa’s continued economic integration, through the African Continental Free Trade Agreement (AfCFTA) and through the WTO, in order to further fuel the continent’s growth and development. He congratulated the group on the recent entry into force of the AfCFTA, which he described as “hugely welcome”. The meeting was hosted by the Coordinator of the Group, Ambassador Eloi Laourou of Benin, and African Union Ambassador Ajay Kumar Bramdeo.

The Director-General thanked the coordinator for facilitating the meeting and stressed the importance attached to meeting with the group. He provided an overview of the state of play, highlighting the implications of rising trade tensions especially for developing countries and least-developed countries (LDCs), outlined major challenges facing the trading system and commented on the impetus for WTO reform.

“Clearly there is a lot of work ahead of us. I hope that the Africa Group will remain at the forefront of these debates. I am ready to assist in whatever way I can. We are in contact with the African Union and Commissioner Muchanga and are exploring ways in which we may be able to work more closely together, and specific areas where we can provide greater technical support.

“This is in connection with our work here at the WTO, and in connection with the African Continental Free Trade Area. I want to congratulate you on the entry into force of the AfCFTA. The rapid progress that you have made here is hugely welcome. It shows how much you value trade and greater integration.”