Highlights for Tuesday, 28 May 2019, UN-Habitat Assembly 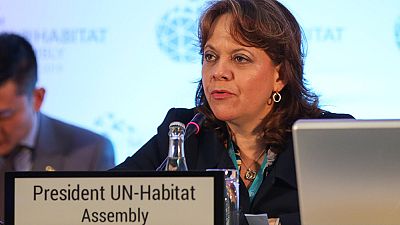 On Tuesday, the UN-Habitat Assembly continued its deliberations at the UN Office at Nairobi (UNON), Kenya. Delegates listened to regional and national statements, which focused on efforts to promote the New Urban Agenda (NUA) and sustainable urban development. The Drafting Committee commenced its considerations of draft resolutions.

Two special events focused on the Gender Forum on Women and the NUA, and the One United Nations Dialogue respectively.

Report of the World Urban Forum

Maimunah Mohd Sharif, UN-Habitat Executive Director, reported on the 9th World Urban Forum (WUF) (HSP/HA/1/5 and INF/5), describing it as an inclusive platform supporting the achievement of the New Urban Agenda (NUA) and the Sustainable Development Goals (SDGs). She reported on the 2018 WUF, held in Kuala Lumpur, Malaysia, noting that it was attended by 24,000 participants from 163 countries, which reflects the importance of the urban agenda. She highlighted the Kuala Lumpur Declaration outcomes, including the need for integrated policy frameworks, strengthened partnerships and innovations. Executive Director Sharif announced that World Habitat Day will be hosted by Cameroon, on October 7th, 2019; and also highlighted that World Cities Day will be hosted by the Russian Federation, in the city of Yekaterinburg, on 31 October, 2019. She further welcomed participants to WUF 10 in 2020, in Abu Dhabi, United Arab Emirates, and announced that WUF 11 will take place in Katowice, Poland, in 2022.

Executive Director Sharif introduced the draft strategic plan 2020-2025 (HSP/HA/1/7), noting that it provides links to the 2030 Agenda on Sustainable Development, the Sendai Framework on Disaster Risk Reduction, the Addis Ababa Action Agenda, the Paris Agreement, and the NUA. She stressed that the plan is the product of a participatory process and provides opportunities for UN-Habitat to be a thought leader and an agenda-setter in the human settlement discourse. Underscoring opportunities for UN-Habitat to effectively influence policy, she highlighted that the plan contains four mutually reinforcing domains: reduced spatial inequality and poverty in communities across the urban-rural continuum; enhanced shared prosperity of cities and regions; strengthened climate action and improved urban environment; and effective urban crisis prevention and response.

Burundi, on behalf of the AFRICAN GROUP, shared the African vision regarding urbanization and human settlements. He stressed that well-planned urbanization could contribute to cities’ transformation and structural reform of the economies, and called for strengthening human and institutional capacities. He highlighted relevant work under the African Union (AU) Commission, including monitoring of implementation of the NUA in Africa and organizing awareness-raising workshops at the sub-regional level.

Delegations welcomed UN-Habitat’s new governance structure, noting that it will facilitate transparency and accountability. Many countries called for additional cooperation with UN-Habitat to accelerate the implementation of national urban agendas.

ETHIOPIA welcomed the work of the AU to achieve the NUA, the 2030 Agenda, and Agenda 2063. VENEZUELA proposed rethinking housing as a social good and not just a market good. The REPUBLIC OF KOREA discussed initiatives using artificial intelligence and virtual reality technology to address urban problems.

ALGERIA highlighted development and geographical challenges in implementing the NUA. IRAQ and SYRIA stressed the negative impacts of war and terrorism. JORDAN called for collective responsibility to address the Syrian crisis and supported urban planning processes which cater to the needs of refugees. PALESTINE stressed challenges associated with occupying authorities that limit any development potential. AFGHANISTAN reported on the roll-out of a “security of tenure” project for one million households, where land parcels will be registered in the names of both wife and husband. GUATEMALA noted national plans to incorporate disaster risk reduction measures in the urban development plan.

UGANDA called for additional focus on secondary market towns and rural growth centers. GERMANY called for elaborating the role of the Committee of Permanent Representatives (CPR) to avoid an overlap with the mandate of the Executive Board. CHINA proposed a global award for outstanding achievement for a city to be awarded on World Cities Day. TANZANIA, TURKEY, and MYANMAR stressed the importance of sharing experiences and learning from others.

GERMANY announced a contribution of 200, 000 Euros to the Multi-Donor Trust Fund to finance UN-Habitat’s new governance structure. SRI LANKA pledged to double its annual contribution to UN-Habitat from 2019. JAPAN highlighted that the country supports poverty reduction projects and the improvements of human environments, having contributed USD 120 million over the past five years.

MALI noted the financial resource mobilization challenges related to implementing the NUA. KUWAIT announced a financial contribution of USD 100,000 towards the success of UNHA 1. INDIA committed to continuing its annual contribution to the Trust Fund. NORWAY highlighted the importance of UN-Habitat’s financial independence. NIGERIA and others called for sustainable and predictable funding to support UN-Habitat activities.

ERITREA highlighted that as most of their population still resides in rural areas, the country is embarking on a project to create “semi-urban areas.” NIGER informed delegates that the country is working on new types of cement to bring down the cost of building and promote sustainable development. ISRAEL announced that it would submit its first voluntary national review, in July 2019.

In plenary, UNHA 1 President Delgado proposed, and delegates agreed, that the drafting committee would be chaired by Fernando Coimbra, Brazil. She noted that the ministerial declaration on innovation for better quality of life in cities and communities (HSP/HA/1/L.3) is scheduled for adoption on Friday, and called on delegates to forward any relevant, additional comments by Wednesday.

Delegates discussed whether the title of the resolution should be amended to indicate that gender equality is the objective and mainstreaming a tool to achieve it. In this respect, the title was amended to: “Achieving gender equality through the work of UN-Habitat to support inclusive, safe, resilient, and sustainable cities and human settlements.”

Delegates exchanged views on terminology with some requesting replacing references to “gender” with “men and women.” Others opposed noting, inter alia, previously agreed relevant language, including in the Strategic Plan 2014-2019. Delegates also debated a reference to “sexual and reproductive health care services.” They agreed on the fact that marginalization and systematic discrimination of women “hampers the full enjoyment of human rights and is an impediment to achieving the SDGs and NUA.”

Participants further disagreed on references to adequate human and financial resources, with some delegations requesting that emphasis be placed on the voluntary nature of potential contributions. Delegates further addressed potential budgetary implications of activities included in the draft resolution.

Arrangements for the transition towards the new governance structure of UN-Habitat: Delegates discussed the dates of UNHA 2 to be held in 2023. Regarding the development of a UN-Habitat Stakeholders Engagement Policy by the Executive Board, participants exchanged views on whether this should be considered and possibly approved by UNHA 2, with some stressing that the Executive Board should approve the plan, while others underscoring the implications to the Assembly’s work. Most agreed that approval should take place prior to UNHA 2, if possible.

Enhancing Capacity Building for the Implementation of the NUA and SDG 11: This draft resolution (HSP/HA/1/L.6) was co-sponsored by Brazil, Argentina, Chile, Costa Rica, Cuba, Mexico, Colombia, and Uruguay.

Delegates agreed to a revised title on enhancing capacity building for the implementation of the NUA and the urban dimension of the 2030 Agenda to reflect that the work goes beyond SDG 11. They debated whether to retain a preambular reference to the Paris Declaration on aid effectiveness, eventually agreeing on “recognizing capacity building as one of the distinctive features of South-South cooperation and further recalling the Paris Declaration.” They also agreed to delete reference to capacity building on “voluntary and mutually agreed terms.”

Views differed over operational text referring to a UN- Habitat “in-house center of excellence,” with some preferring “center of knowledge.” The timing of the Executive Board’s first session was also considered. Delegates eventually agreed to “enable the research and capacity-building branch based on available resources to coordinate and lead capacity building as a cross cutting function,” and for the draft strategy to be presented at the first reconvened session of the Executive Board.

Delegates began consideration of the draft resolution on the strategic plan 2020-2025 and agreed to adjust the date to 2023 to allow the next Assembly to deliberate the future strategic plan.

This Dialogue brought together countries and UN agencies to discuss how to best utilize the UN Sustainable Development Group in the implementation of the UN System-wide Strategy on Sustainable Urban Development. In particular, delegates heard reports from UN Resident Coordinators from Bolivia, Kenya, Montenegro, and Bahrain, who are in the initial phases of implementing the Strategy through advising governments on urban policy; as well as heads of UN Agencies, who detailed further opportunities for collaboration with UN-Habitat in the implementation of the NUA.

Distributed by APO Group on behalf of UN Habitat.

Acknowledgements:
This text was written and edited by Asterios Tsioumanis, Ph.D., Asheline Appleton, & Tallash Kantai from the International Institute for Sustainable Development (IISD).

All photos on this page are by IISD/ENB | Kiara Worth

For more IISD images from the UN-Habitat Assembly please go to http://enb.iisd.org/habitat/assembly/1/attrib/