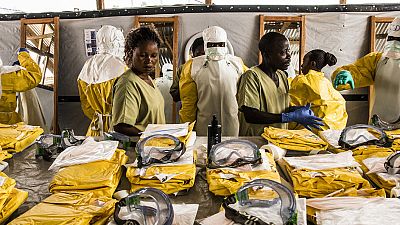 Although the Ebola response in the Democratic Republic of the Congo (DRC) continues to make headway thanks to the determination of health workers on the ground, insecurity is still hampering the response, the World Health Organization (WHO) said on Tuesday. This has led the UN to establish a new coordination structure in the hopes that access to at-risk areas can be improved.

“We are seeing a dramatic increase over the past few months in the number of security incidents in the area of North Kivu, which lies at the epicentre of this ebola outbreak,” said Dr. Matshidiso Moeti, WHO Regional Director for Africa, to journalists in Geneva as she recalled the brutal killing of a WHO colleague in mid-April.

She added that on Saturday, another attack took place during which another health worker was killed.

So far, in 2019, there have been 174 attacks against health care facilities or workers. That’s a three-fold increase compared to the number of attacks that took place during the previous five-month period (August through December 2018).

“Insecurity really is what is making the response to this Ebola outbreak so challenging and also so unpredictable,” she insisted, adding. “And this insecurity leads to a lack of access and that is really what is driving the increase in cases. When the response can’t reach people, they don’t get the chance to be vaccinated or to receive life-saving treatments if they do fall ill.”

Currently, the DRC’s worst ever outbreak of the deadly virus has seen 1,920 Ebola cases overall, including 1,281 deaths. Despite the risks, the more than 700 workers deployed by WHO remain in the area working alongside other health teams providing care.

“This Ebola response is one of the most complex health emergencies the world has faced,” said Dr. Moeti, explaining that “the authority of the Government is not strong, and what further complicates the situation is that there are many belligerents and armed groups and parties, and it’s not always clear under whose leadership they are operating”.

To strengthen the coordination of the response and “create a much more enabling environment”, this week, the Deputy head of the DRC peacekeeping mission MONUSCO, David Gressly – newly appointed UN Emergency Ebola Response Coordinator – will be arriving in the city of Butembo, at the epicentre of the outbreak. Among several other key objectives, his role will be to help strengthen the DRC Government’s engagement around security, in a bid to reconcile various warring parties in the area.

In parallel, a scale-up of operations in the region from health and humanitarian organizations is also expected.

“I’m hopeful that this new structure will bring the much-needed stability, safety and clarity, and enable the response to proceed,” said Dr. Moeti.

To date, more than 500 people have survived thanks to adequate care. In particular, transmissions in medical centres (“nosocomial transmissions”), which represented 35 per cent of all transmissions just a few weeks ago, which are now down to 5 per cent.

“That number is still too high, we still want to reach for zero,” said Dr. Michael Ryan, chief of WHO’s Health Emergencies Programme.

Dr. Ryan also explained that efforts in improving the surveillance and tracing of cases are also showing progress with 1,400 alerts per day on average, a number that was only half of that six weeks ago. The number of samples taken daily for laboratory analysis is also increasing steadily with the proportion of positive cases decreasing.

In another “encouraging sign”, Monday was “the first day in a very long time that we had zero positive cases among community deaths”, said Dr. Ryan, as he gave credit to the “brave frontline workers who risk their lives every day to do this work and to our communities who are very much engaged and participating in the response.”