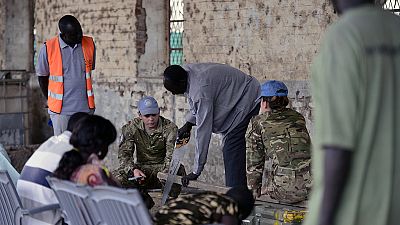 Rebuilding the war-torn city of Malakal, a ghost town during much of the armed conflict, has proved to be a challenge, with both adequate materials and local know-how lacking. Over the past couple of months, UN peacekeepers have taught interested locals basic construction skills.

“All my life, all I’ve known is fishing, so I thought I was going to remain a fisherman,” says Obach Okan. “But now, after this training, I have decided to become a carpenter.”

He and forty-one peers, some staying at the United Nations Mission in South Sudan’s protection site for displaced people and others residing in Malakal town, are now well prepared to rebuild their previously bustling city, the second largest in the country.

They have recently completed a seven-week basic engineering training programme provided by peacekeepers from the United Kingdom’s engineering taskforce.

“Of all the trainings I’ve attended since 2013, this has been the best because we did everything practically,” says Mr. Okan. “From basic things like how to hold a nail properly to avoid hitting our fingers with hammers, to harder things like building and carpentry.”

Their learning has indeed been rather comprehensive. Bricklaying, concreting, basic electrical work, carpentry and joinery have all been part of the course schedule, with some of the trainees now feeling ready to put their new skills to the test.

As an increasing sense of peace and security is taking hold of the area, thousands of displaced persons are thought to be considering a return to their homes, or what remains of them, within a not too distant futures. Shelters will be needed, and some freshly trained handymen and women have assisted in constructing such facilities in nearby places like Banglai, Gelachel and Nangdar.

The teaching engineers have also benefitted from the experience, according to their commanding officer Lieutenant Colonel Jamie Stuart, as it has provided them with an excellent opportunity to get to know the South Sudanese people as a community.

“While we live in very close proximity, it is often difficult to interact with them one to one. This training has allowed our soldiers to make a direct difference to the lives of people who have suffered so much in recent years,” he says.

There is much work to be done, as Malakal’s infrastructure has also taken a bad beating. Many eateries – some of them known to slap up peanut butter sandwiches and other filling delicacies – offices, churches, mosques and other buildings are still bare and empty, some with gaping holes where roofs used to be, others with walls crumbling after years of neglect.

The renovation efforts made by the town’s government have been hampered by the country’s poor road network and the subsequent difficulties of bringing in construction material from the faraway capital Juba and from neighbouring Sudan, but also by the lack of a qualified workforce.

“Many of those who can provide labor for construction projects fled during the fighting and others are living in the protection site,” explains town mayor Peter Riak, “It has been difficult to find people who can do the work quickly and properly.”

With a gradual return to peace, the peacekeeping mission is exploring ways to build the capacity of the local people who will eventually return and resettle in their areas of origin. This includes providing support for vocational training in different areas of expertise, and Jamie Stuart believes that his engineers have made a difference.

“Our hope is that the skills we have taught them, whether that is bricklaying, carpentry or domestic electrics, will allow them to rebuild their lives and communities and take control of their own destiny.”