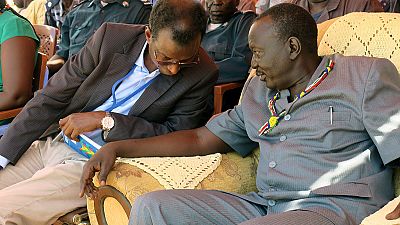 The government of Aweil has received a newly renovated police station to improve the enforcement of rule of law in this part of South Sudan.

While receiving the keys of the Station from the United Nations Mission in South Sudan, the Aweil governor Jaldit Malith Jal said the UN is a true partner for peace.
“UNMISS is like an uncle to the people of Aweil. Whenever we are in need, we shall come to our uncle,” he said.

The facility was repaired to the tune of 49,000 dollars, financed by the peacekeeping mission and done by the Pan Aweil Development Agency over the past three months.

The Agency’s Director, William Kolong Pioth said the renovation is timely as the local police force has been operating under trees.

“I believe it will have an impact because the previous police station was not in good shape. Officers were sitting under a tree, but now they have offices and desks.”

The renovation of the police station will also provide a permanent solution to the challenges faced by detainees, as the new facilities sport significantly larger cells.
“The building will create a conducive environment for the work of the police,” said Marko Yak, who has been a police officer since 1972. “This will help the police to serve the community.”

The handover ceremony ended with music and other cultural performances at the shiny, new law-enforcing facilities. There was much rejoicing.