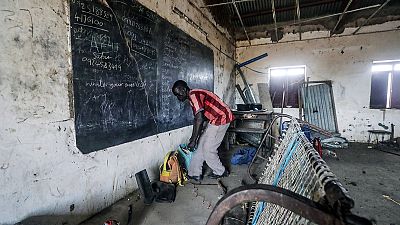 The United Nations Mission in South Sudan (UNMISS) and partners are working with military commanders and government officials to create a safe and secure environment for displaced people to return home, including by demilitarizing civilian installations such as schools and hospitals in the Upper Nile area.

“We are now looking at key areas and activities. On Monday we are going to Kodok, looking at demilitarizing the places the military occupied during the fighting in the last five years,” said Hazel De Wet Head of the UNMISS Field Office in Malakal.

“This will contribute to building trust and understanding for displaced people, that it’s now safe to return to their places of origin,” said Ms De Wet.

some community members in the Upper Nile area, especially those living in the UN protection site, have said they do not feel safe to return to their home areas, which are currently occupied by the military.

Recently, several representatives of the displaced people from the UN protection site were taken by UNMISS to the Shilluk King in Fashoda on a “go and see” visit so that, on return to the site in Malakal, they can inform their peers about the conditions in their home areas, which they have not been able to visit for the last five years.

“They are going to stay with the king from the 16th to the 20th of May, and we will be able to facilitate another transportation for them so that they come back to Malakal,” said Braima Keikura from UNMISS’ Relief, Reintegration and Protection Section, who led the team to the king, explaining the significance of the visit.

Creating a safe and secure environment is a major element for returns, and a solution-based working group headed by UNHCR – the UN refugee agency – and key substantive components of UNMISS have developed principle guidelines for this.

“This is the first organized visit to the king. The king is in support and the last time I saw him, he requested support for his subjects to come back,” said Ms. Dewet.

Ms. Dewet pointed out that displaced people had raised concerns about the absence of the services they have been receiving in UN protection sites in their places of origin.

However, she said humanitarian partners were looking at that and they had taken intent surveys and held focus-group discussions on how to scale up their services in the various places that communities have identified as target areas of return.

“Managing expectations of each household in terms of return and what they can expect once they return is a difficult task,” said Ms. De Wet.

She appealed to the international community, including donors, to help returning communities with early recovery intervention efforts to make them self-reliant.