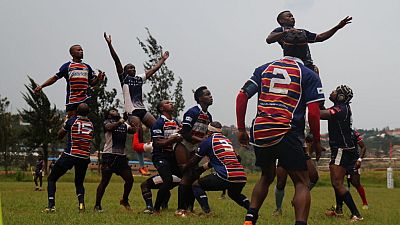 Rwanda Rugby Federation (RRF) (www.RwandaRugby.com) Rugby National league 15 aside sponsored by Akilah Institute for women action resumes this weekend as The Rwanda Rugby federation suspended the league in April to remember the victims of the 1994 Genocide against the Tutsi.

The President of Rwanda Rugby Federation, Kamanda Tharcisse confirmed that the second round of the National league will return this Saturday with two fixtures to be played in south league and Kigali league.

Champions Kigali sharks will face their league title defence with a tricky encounter against a rejuvenated Thousand hills RFC side on Saturday 25th at the Red cross ground, kacyiru .

According to Kigali sharks  Head coach, Moise Fils Habumugisha, we hoping to make a winning start for the first second round game to continue leading  Kigali league.

“We want to play the ball; it won’t be about hits and using our size to win. I have players, and they are good and we have worked together. We want to win but beautifully,” said Habumugisha Kigali sharks  head coach.

In south league Kamonyi -based Puma RFC, who have lost most their first round games  host university side UR Grizzlies  RFC at Remera Rukoma ground on Saturday 2:00pm.