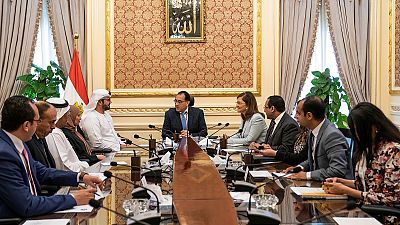 Dr. Moustafa Madbouly, Prime Minister of Egypt, has hailed the UAE's contribution to improving his country's government performance as part of the long-standing partnership between the two countries.

This came as the Egyptian premier received a UAE government delegation led by Mohammad bin Abdullah Al Gergawi, Minister of Cabinet Affairs and The Future. Ohoud bint Khalfan Al Roumi, Minister of State for Happiness and Wellbeing and Director-General of the Prime Minister’s Office, and Juma Mubarak Al Junaibi, UAE Ambassador to Egypt and Permanent Representative to the Arab League, attended the meeting along with Dr Hala Al-Saeed, Egyptian Minister of Planning, Follow-up and Administrative Reform.

During the meeting, which is part of the official visit of the UAE delegation to Egypt, both sides discussed their future plans, especially with regards to organising the Egypt's 2018 Government Excellence Conference, and the latest developments to the Egypt Award for Government Services Applications by University Students, which was launched in November 2018. Both sides also discussed the 'One Million Egyptian Coders Award'.

Al Gergawi stressed that the signing of the strategic partnership agreement falls in line with the directives of the UAE’s leadership to ensure fruitful partnerships in the areas of management and government work, and share successful experience with friendly countries.

He added that the partnership highlights the UAE’s keenness to boost its historical relations with Egypt and affirms the belief of their leadership that cooperation is the best way to improve the lives of their peoples.

Dr. Al Saeed highlighted Egypt’s efforts to realise the goals of the award and noted the launch of awareness sessions providing 30,000 training hours for around 4,800 people.

He also pointed out that training around 1,000 government employees on several key topics, including the government’s strategic efforts to improve its services, develop strategies and deliver the future, will improve their knowledge.