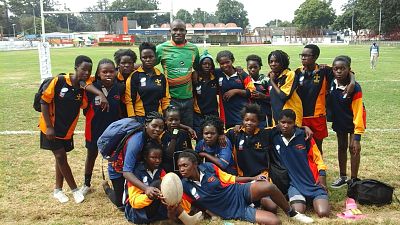 As World Rugby launches the campaign dubbed  “Women in Rugby Global Marketing Campaign” on Tuesday 21st May, 2019 at its headquarters in Dublin, Ireland, the Zambia Rugby Union (ZRU) (www.ZRU.rugby) has fully welcomed with both hands.

Zambia Rugby Union President Gen Clement Sinkamba said the Union has been working around the clock to ensure Girl's and Women's Rugby gets an equal footing on the playing field. “Our Executive has for the first time in history included a Women's League which is running side by side with the Men's League in the 2019 Season. The World Rugby Campaign which comes under the hashtag #TryAndStopUs resonates very well with our strategy of ensuring a No Retreat – No Surrender kind of approach where we are rolling out the Women's game to almost all Schools, High Learning Institutions and Communities” he said.

Gen Sinkamba further added that the Union has through its Get Into Rugby project been making steady, visible and indisputable headways aimed at growing the game with a bias towards Girls and Women's Rugby.

Get Into Rugby (GIR) Zambia Manager who is also Communications Manager Tom Chaloba has reviewed that the Zambia Rugby Women's League has ended with the Mopani Copper Mines sponsored side Mufulira Leopardess Rugby Club being crowned winners in a finale played at The Leopards Cage in Mufulira. The Leopardess Team beat 2nd placed Green Eagles Women's Rugby 32:00 to cement their dominance on the local scene having earlier in the month beaten 3rd and bottom placed Red Arrows Rugby Club.

“We continue making strides to remove the badge that rugby is a dangerous game, this is by organizing Tag/Touch Rugby Games and Tournaments, conducting public demo games, Social media campaigns, Radio and TV interviews, etc, to help us get the word out to the masses. Believe it or not, we are getting positive reviews and results” Chaloba concluded.