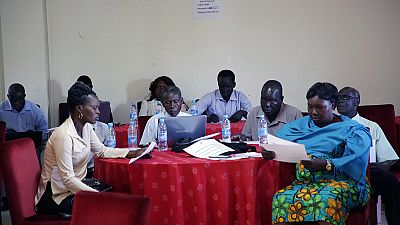 “I want human rights to be taught to even the young ones.”

Omoro Iteng Michelle, a university student on an internship programme at the South Sudan Human Rights Commission, is on a mission. And that mission has brought her to a room full of South Sudan’s officers tasked with securing the human rights of their citizens.

“From a young age you’re supposed to know, ‘I have a right as a student; I have a right as a person, to education, health, the life, the shelter that I have,” says Michelle, who brings a different, fresh view to the conversation: human rights and the youth.

The young nation’s human rights officers are attending a training workshop, supported by the Human Rights Division of the United Nations Mission in South Sudan (UNMISS). The training is aimed at sharpening the officers’ skills so they can ensure that international human rights principles are adhered to, as they go about executing their tasks.

“It’s sort of a refresher also, going forward, in terms of monitoring, investigations, documentation, and tailoring it to the context of South Sudan, and emerging issues in the country,” says UNMISS Human Rights Officer, Victoria Ngali, who is the lead facilitator at the workshop.

“I learned the Human Rights law, the human rights principles, the Bill of Rights,” says Grace, who works for the South Sudan Human Rights Commission as a monitor and inspector, recapping some of the things she had learned in the morning session of the refresher course.

“In South Sudan, there’s a lot of human rights violations, but during court judgements, when you [bring up] something about human rights, they just ignore it; they don’t put it into law,” adds Grace, who believes things will only change if the government implements the human rights law and the attendant bills and principles.

South Sudan’s image has been scarred globally by several damning reports of human rights violations during its five-year civil war. The war had also ravaged the country’s institutions, with human rights offices closing across the country.

Now that there is a peace agreement in place, the country is embarking on rebuilding its institutions with support from the UN and partners, as it hopes to put an end to all human rights violations.

Deng Wol, South Sudan’s Human Rights Commissioner, says there are already some dividends in the country’s field of human rights.

“I think these days there’s some improvement in the environment of human rights,” says Mr. Wol, who says his Commission now plans to reopen its human rights offices across the country.

“There’s not much violation in some areas, but in the previous months there was a lot of violations, and people [were living in fear] and a lot of human rights violations took place. But currently, I think, there’s a bit of improvement,” adds Mr. Wol.